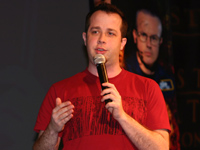 One of the highlights of Saturday’s day full of events at The Official Stargate SG-1 / Stargate Atlantis Convention in Vancouver, B.C. was, without a doubt, the stage talk given by Atlantis writer Martin Gero. The young phenom has penned such episodes as “The Storm” and “The Eye,” “Duet,” “Grace Under Pressure,” and SG-1 “The Powers That Be.” One story he told that fans won’t hear anywhere else: the original idea behind the hit Season Two episode “Grace Under Pressure,” which saw Rodney McKay sinking in the ocean alone in the back of a Puddle Jumper. (Beware of spoilers for that episode!)Martin knew for months that he wanted to do an underwater episode, but it took the right story to make “Grace Under Pressure” work. In his original pitch, Lt. Laura Cadman (Jaime Ray Newman) was in the episode.”It was originally going to be like a one-act play with McKay in the back of a Jumper. And that was one of the hardest episodes I’ve written because so much of it is just David Hewlett [alone on screen].””It was originally going to be Cadman — we were going to kill Cadman in the front where we killed Griffin,” he revealed. “And she was going to appear to [McKay]. And then someone said, ‘You know what? Carter would be better.’ I jumped at the chance because the one SG-1 I did write was before Amanda came back.”Instead, the Lieutenant who was trapped in Rodney’s body in “Duet” returned for a non-fatal appearance in “Critical Mass.”

Martin also talked about getting into writing for television, and how he landed a job on the Stargate team after pitching and writing Season One’s “Childhood’s End” — despite the fact that he had never written science fiction. “Thankfully, I was hired at a time where we were kind of understaffed, and I wrote a lot, and started producing,” he said. “And it’s been a whirlwind three years.”Martin also shared his opinion on the show’s loss of Rainbow Sun Francks (“Aiden Ford”) as a regular character, noting that there was shared blame between the writers and the actor for why the show “in some way wasn’t working” in Season One. “But he’s going to land on his feet,” Martin said of his friend. “I have no worries about Rainbow.”He also talked about Atlantis‘s new villains, making their debut early in Season Three. The new race is a big part of Atlantis striking out on its own this year, after having been accused of duplicating ideas from its sister show on more than one occasion.He told the audience not to expect Jonas Quinn (Corin Nemec) to appear on SG-1 again.Finally, Martin hinted at an episode he is writing that will introduce Rodney McKay’s estranged sister, and shared details on his duties as a producer on the show.Martin also gave lucky fans a guided tour of the sets of SG-1 and Atlantis on Saturday morning.Season Three of Stargate Atlantis is now in production in Vancouver, and will premiere this July on The SCI FI Channel in the U.S.!Photos by kiwigater. Special thanks to blingaway.