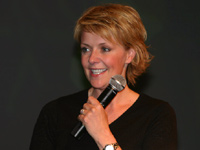 Stargate SG-1 co-star Amanda Tapping appeared on stage and visited with fans at Creation Entertainment’s official Stargate convention in Vancouver on Sunday, and talked about Samantha Carter and the show’s new tenth season.

Her time on stage started with a special thank you from series executive producer John Smith, who told the gathered crowd of hundreds what a class act Amanda is.

When asked by one fan if there is any hope for Sam-Jack relationship fans (“shippers”) in the new season to come, the actress surprised the audience with a very specific answer: “Yes.” It was an early hint at the return of Richard Dean Anderson as Jack O’Neill in a few episodes, confirmed by SCI FI a few days later (story).

She also talked about her many on-screen kisses with coworkers, including Richard Dean Anderson and, more recently, Stargate Atlantis‘s David Hewlett (“Rodney McKay”). The two locked lips in “Grace Under Pressure,” for which Amanda said she got down to her underwear when her costume kept floating away from her body when she went into the water.”He’s a good kisser!” Amanda smiled. She also enjoyed the change of pace that came with the underwater filming for the episode. “I always love it when we get to sink into water and do crazy things like that,” she said. 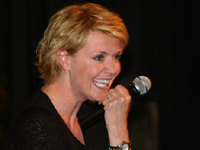 When asked about the confusion over whether Carter or Mitchell would be the official leader of SG-1, Amanda said that the question will be addressed in an upcoming episode. Both officers hold the rank of Lieutenant Colonel. In the scene, Cameron Mitchell talks with General Landry about the fact that, with Carter the same rank and both Teal’c and Daniel civilians, he can’t really give anyone on his team orders.

Amanda also talked about working with the animatronic Thor puppet, which was on display in the props museum at the convention, courtesy of Stargate Productions. “He’s cute, but he’s not a good kisser at all,” she joked.

She also told the story of the day that Thor hit on her, during the filming of the Season Four premiere “Small Victories.” During the filming of one scene with Carter and Thor on board the Asgard’s mothership, the puppeteers raised up the small alien’s hand and touched her “bum.” Without thinking, she turned and smacked him in the head very hard! When she realized she had slapped an incredibly expensive prop, she got down on her knees and asked the puppet in all seriousness, “Are you OK?!”Following her entertaining time on stage, Amanda chatted with GateWorld before signing autographs for anxious fans. More from Amanda to come in the weeks ahead! Also stay tuned for GateWorld’s full photo gallery from the convention weekend.