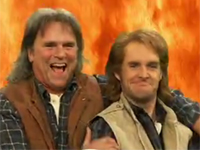 Richard Dean Anderson and Will Forte

Did you see Richard Dean Anderson appear on Saturday Night Live‘s MacGruber sketches (a.k.a. Pepsi Super Bowl commercials) a month ago (story)? Still holding out for a MacGyver/MacGruber crossover that is … what’s the word … funny? Wait no longer.

Anderson — Stargate‘s General Jack O’Neill — returned to SNL this past weekend, appearing (with a much-improved mullet hairpiece) in another three MacGruber sketches. Watch them below, courtesy of Hulu (U.S. viewers only).

The new sketches gave Anderson more of a chance to be front-and-center, and to play up the relationship (literally!) between his venerable 1980s character and Will Forte’s spoof.

Will MacGyver make another return to SNL? Catch the show Saturday nights at 11:30 p.m. Eastern/Pacific on NBC. Anderson appears in Starate: Continuum, which makes its U.S. television debut Friday, April 3 on the SCI FI Channel. 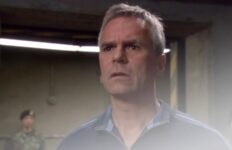 The Pepsi one WAS funny. This one was desterbing on many levels. Gross, I would have stayed out of it if i were RDA.

Good to see RDA. The Pepsi one wasn’t funny. And, if I remember correctly, disturbing on many levels. This one was great – clean and mean, but I would have stayed out of it if it weren’t for Will Forte since it wasn’t great.

I think they need to keep them coming. Perhaps even a MacGruber/MacGyver movie?…Well maybe I shouldn’t go that far.

The videos are hosted on rda’s homepage
http://rdanderson.com/

I like RDA and I think he is great and all…but this is below him. This was much worst than the Pepsi one. Immature and unfunny. Will Forte is terrible in my opinion. This is…heh.

i had even more fun with this than the pepsi ones. it was great seeing rda and i laughed! :D

Universacred – don’t worry, you’re not missing much. It’s nice to see him but these are all dumb… just like the rest of modern SNL.

Why don’t use Youtube for this? Or a similar way?

in what world would anyone consider this funny?
the first time they tried this skit it wasn’t funny and the same for this one…

I’ve seen the pepsi ones, I thought they were funny. These are grown men, their humour reflects that sometimes. Even though we grow older, we don’t feel older mentlly so sometimes we get a little out of control, in the right environment , it’s ok.

I thought both skits were entertaining… yeah, slightly disturbing in a way, but RDA’s appearance isn’t what it once was… I’ll say this though… my 9-year old son LOVES the McGruber bits, and if it serves as a gateway to get him to watch SG then all I can say is: RIGHT ON, KEEP’EM COMIN’!

i can’t believe how many times i’ve watched this! got to have my rda fix, and the other guy’s cute too. :p