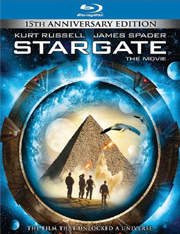 in high definition will include 4 hours of bonus material — some new, some reissued from previous releases of the film.

The new edition will be available October 27, just one day before the anniversary of the film’s theatrical opening in 1994. It comes with a suggested price of $29.99 (U.S.).

The film has a new 1080p/AVC MPEG-4 encode and  an English DTS-HD Master Audio 7.1 soundtrack.

Three of these featurettes are new to this release, as well as the gag reel and trivia game.

Presumably the cut of the film is the longer director’s cut, which has been included on every DVD and Blu-ray release since the Special Edition.

is available on DVD and Blu-ray.  That Blu-ray edition includes only the audio commentary.

Stargate stars Kurt Russell as Colonel Jack O’Neil and James Spader as Dr. Daniel Jackson, who travel through the newly-activated Stargate and save the people of a distant world from enslavement to the evil alien Ra.

Pre-order Stargate: 15th Anniversary Edition on Blu-ray now at Amazon.com and save! As of this writing the movie is on sale for $19.99 (subject to change), and your pre-order also helps to support GateWorld.

YAY! I always loved the original, way better than the later seasons of SG1 and SGA (they sort of lost track with what stargate originally was) they are still good but the movie and original fews series have a special place in my heart.

Although I don’t have a blueray player, I’m happy that this is out now because it will have come down in price when I eventually do.

How many more editions of Stargate do we need? You would expect a release called “Ultimate Edition” to include all the special features there is, as well as the best video and audio. Apparently this isn’t the case so long as theres the prospect of fleecing more money from us.

I’d like to know if this version is going to include the Theatrical version as well (which leaves more of a mystery). Looks like the audio and video are going to see some improvements which is nice. I’ll likely be picking this one up but will hold onto my DVD and BR copies (DVD includes theatrical) or give the BR to my brother. Like ID4 this movie is one of those must haves to show off your HD home theatre setup.

I don’t have a bluray player, but if I ever get one, I would most certainly purchase this. I already have the ultimate edition, but I wanna see it in high quality.

I hope they actually fix the subtitles on this blu-ray version. They didn’t on the last.

If this gets released in the UK, with all the same features as the US version, then I’ll definatly buy a Blu-Ray player for it!

Cool that the original Stargate movie is is available on blue ray. I have it but not on blue ray. I dont have a blue ray player. I like the Original movie.