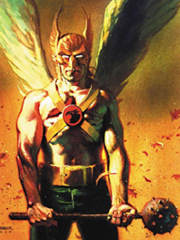 Veteran Stargate SG-1 actors Michael Shanks and Brent Stait are moving to Smallville.  The actors will guest star as members of the Justice Society in an upcoming episode.

Shanks (“Daniel Jackson”) will play the classic DC Comics hero Hawkman in the episode, titled “Society,” according to IGN.  The episode is penned by comic book writer Geoff Johns.

Stait will play Dr. Fate in the episode.  He played Louis Ferretti in the first season of Stargate SG-1 (including “Children of the Gods”).  On Atlantis, he pinch-hit for Connor Trinneer and played the Wraith Michael under prosthetics in the second season finale, “Allies.”

UPDATE: Playing Stargirl in the episode will be 24-year-old Brittney Irvin, Fancast.com reports.  Before she was all grow’ed up, Irvin played Merrin in the SG-1 third season episode “Learning Curve.”

UPDATE 2: Writer Geoff Johns confirmed that the episode will, in fact, be a two-parter, with the second half titled “Legends.” (via Krypton Site)

“Society” and “Legends” are expected to air in January.  Look for Smallville Friday nights on The CW!

(Thanks to Craig and herbertsommerfel for the tip)

Guess I’ll be watching Smallville, then! ;)

Dangit, Michael. I said I’d never watch Smallville again. And then you go and gueststar. *sigh*

Smallville could use the help, that show got so cheesy

Hey… the man needs a paycheck!

Ugh, now I have to watch Smallville!

What about Jason Momoa getting a big part in HBO’s “Game of Thrones”? I mean, you didn’t say anything about Paul McGillion or Lexa Doig being on Supernatural. How do you choose about who to write?

@katikatnik: Please do not perceive a slight on any actors. We would publish every single one of them if we had the resources. There are currently two of us writing news, and we are heavily reliant upon people e-mailing in news tips (as this one was).

The “Game of Thrones” story is going up today. What we could really use, rather than perceptions of slight, is some help writing news items.

I just wanted to point out the Britt Irvin is also a Stargate SG-1 veteran. She played Merrin in season 3 episode 5 “Learning Curve”. :-) http://www.imdb.com/title/tt0709113/

That show is still one the air! Is there like a secret 8th day of the week that you can only access with an Easter Egg code, where that show is broadcast?

I think I was still potty training when I discovered how to completely forget that show!

@Darren Sumner: I wasn’t feeling slighted. I was genuinely curious. I mean, Christina Cox’ stint on the short-lived Defying Gravity was mentioned. Some others weren’t, so I was kind of confused if you choose the news by the actor’s importance for the show they are guest-starring on or however.

I would gladly help but English is my third language and I would hate to drive your fans away in hordes! ;P

Thanks for the update on Brittney Irvin! She was an excellent actor as a child, and it will be very interesting to see her now.

This is great news! I watch Smallville too, althought I love SG much more, it is a chance to see Michael on screen again…. until they actualy decide to shoot the next movie :D

@Darren Sumner I would be very interested in helping with News items on Gateworld or being involved in any other capacity. I have been a UK fan of Stargate since the very beginning. How can I go about being of service? Thank you

“That show is still one the air!” – how tiresome and purely unoriginal is this phrase.

Awesome news. Big fan of Smallville and the original GATE. Shanks popped up on my guilty pleasure “24” and now the big “S”! AWESOME!

“That show is still one the air!” – I just realized “one” was typed. HAHAHAHAHAHA! Yes I guess it does “won” the air.

@Eva Johnson: Thanks for your interest, Eva! You can read more details about what we are looking for in news writers here. Then e-mail me.

What we really need are writers who (in addition to being good, concise news writers) are self-starters. We always hope to find other fans who will come to us with ideas and finished pieces, rather than those we have to assign stuff to, bug, chase down, and edit.

Not sure how Smallville will deal with the Hawkman character, but in the original comics, Hawkman’s alter-ego is an archeologist, no stretch for MS to play.

Just found that out myself, Quinn, and it made me Lol–and feel a certain sympathy. Being typecast in a niche as small as ‘heroic archeologist’ would make it very difficult to earn a living. ;)