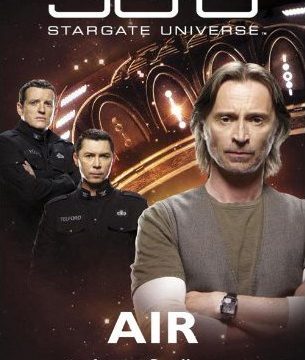 It can be said that the novelization of an episode is nothing more than the script put into prose. And, in some ways, the novelization of  “Air,” the Stargate Universe premiere, is just that. Lines and scenes are reproduced verbatim and there are certainly no plot twists or surprises not seen in the 3-hour episode. What you saw on the screen is pretty much what you’re going to read in the book.

That said, the novelization of an episode does benefit from a freedom from time limits, special effects budgets and actor availability. As such, it can be a richer and more rounded experience than the episode itself.

Anyone who has read the Harry Potter books and then watched the movies, for example, knows that sacrifices are often made to move a plot or keep to a time limit when a written work is turned into a visual one. And, in this case, what was likely a couple hundred script pages were embellished and expanded upon to turn them into almost 300 pages of story.

In this novelization we get a glimpse into Lt. Vanessa James’s attitude and personality. We have insight into that infamous broom closet scene that we don’t get from the episode. And that’s not the only scene, nor is Lt. James the only character whose mind and mentality we get to peek into.

We find out bits about Nicholas Rush and his motivations, and the feelings of Eli Wallace, Matthew Scott and others. We get to peek into characters’ minds, and read in words those actions and feelings that previously were only left up to the interpretation of the viewer.

When I started to read Air, I was expecting to re-experience the 3-part episode. And I did. But I was also pleasantly surprised to discover that the book contains more than the episode does. Are you curious what O’Neill and Rush talked about on their way to pick up Eli? Or would you like to have a bit more of the conversation between Carter and O’Neill?  We get expanded scenes with Jack and an explanation of why people are stationed at the Pentagon, along with an insight into just how Homeworld Security works.

Those scenes – and more – are in there and they certainly add to and embellish an already good story.

There’s no way to know if these scenes were originally in the script and cut for time, or if they are additions by the author. If the former, I’d love to see the DVD release include them. If the latter, then the author’s handle on and interpretation of the characters lines up with mine, which makes it an enjoyable read.

As I was reading it I did discover one odd thing that stood out — a scene between Young and his wife that I didn’t remember from “Air.” And I was right, it wasn’t in “Air,” it was in “Darkness.” This suggests to me that perhaps the scene was shot, cut from the series premiere and then inserted in the later episode. I have to admit, it makes more sense in “Air” than it did in “Darkness.”

All in all, the novelization is what it is: prose written from the scripts of the episodes.  There will be no shocking plot twists, no fantastic revelations. However, if you enjoyed the 3-hour premiere, you will enjoy this book. And the knowledge you get from it is knowledge that will give you a greater sense of insight and understanding in the characters of the show.

Reviews represent the opinion of the author, and not necessarily that of GateWorld or its owner.

Thanks for the review! Definitely going to get this!

It was a good read.

My only question is whether the novel is canon or not?

Cause at any point the TPTB could decided, “we think it would be better to do it this way, good thing we didn’t air that scene in the pilot”.

The technical definition of ‘canon’ is what’s said or seen on the screen. So the scene from Darkness is canon, it just didn’t happen in the show in the same way it did in the book. To the best of my knowledge, the books are approved by the studio in some way. My gut tells me that it was cut for time out of Air but moved into Darkness because it needed to be kept, so they just moved it. In my opinion, it made more sense in Air than it did in Darkness, because in Darkness the implication is… Read more »

Well, I meant in general the character-specific stuff not just whatever the scene with Young is.

So while I’d like to read it for more insight, since it’s not canon than I’d rather not.

If stories don’t affect/connect the others in the show, than that’s just fan fiction to me.

But very interesting maybe they’re be a bit more strict with character continuity with this series.

Little note to the author. The three-part episode actually totals around 2 hours and 8 minutes, not three hours as you mentioned. I know there’s a lot of commercials over there in the States but here in Europe it’s a different story (thank god). On another note. Even though I hardly ever read a book I can imagine that it could make for a more engrossing experience. But I think the biggest advantage of reading a book would be that you have to use your imagination to ‘picture’ the story. After already having seen a tv episode this process is… Read more »

I saw nothing in the book that contradicted canon. Or how I saw the characters acting.

I think it gives more insight into the characters. And, while it doesn’t fit the technical definition of canon, it is approved by the studio.

Is there nothing you guys won’t give a positive review to regarding Stargate? This ‘book’ is silly at best. I’d much prefer to see a real and honest review of something attached to the show than to struggle through a review intentionally spun with positive notes. It’s okay not to like something related to Stargate; it doesn’t make your little website any less entertaining or informative. I’ve seen this kind of review all to often on here, be it an episode or merchandise. I knew before reading that you’d have some sort of positive reaction to the book, as with… Read more »

@the_big_bad: A largely negative review of SGU‘s “Life,” published simultaneously with this review.

Also, if you don’t like the way we do things, you are welcome to start your own Web site. Our reviewer (a Stargate fan) liked the book (a Stargate novel). Why should that surprise you?

@the_big_bad You should listen to some of the podcasts of Darren and David. They usually have a good mixture of positive and negative reviews on subjects relating to Stargate although I have to admit that I sometimes would like a little less diplomacy (without being insulting of course). @Mrja84 Regarding Canon, I remember Sabine C. Bauer (one of the authors of the novels) telling a story at a convention about being at the studio and actually talking ideas with the producers. So, I am rather sure there is a close cooperation. I also would assume that this will be the… Read more »