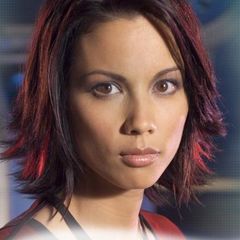 TV Guide has reported the actress is joining the cast of the ABC network series V, playing an OB/GYN who will treat one of the series’ main characters.  That character found out she was pregnant in the November cliffhanger.

The V franchise has roots that go back to the original miniseries, which aired in 1983 on NBC.  The plot involved the arrival on Earth of a technologically advanced race known as the Visitors.  Although seeming to visit Earth for peaceful purposes, it becomes apparent quickly that the aliens have a sinister purpose.

After strong ratings, a sequel miniseries was produced followed by a weekly television series that ran for one season in 1985.  ABC brought the property back to television screens last year as a sweeps event, airing four episodes in November.

The remaining nine episodes of the season will air after the 2010 Winter Olympics in Vancouver — with the first scheduled to hit the airwaves on March 30.  Doig’s casting reunites her with fellow Stargate actress Morena Baccarin (“Adria”), who is a series regular.

(Thanks to Madwelshboy for the tip!)

It will be great to see Lexa Doig back on the screen, fab lady.

I was wondering where that series went. Glad they are using Stargate casts members. And love the even job Morena Baccarin did in the first episodes. Cant wait to see more of the old gang in new garb.

one of the hottest chicks on TV. Shanks is a lucky, lucky man

I’m a big fan of Lexa Doig going back to Tekwar where she played the hacker Cowgirl! Also she was in Jason X with Lisa Rider, her co-star from Andromeda. Great Sci-fi horror-comedy flick. Not very scary.

I’m still hoping V will have a good enough run to get a second full season. I’m hopeful. The original minis still hold up, re-watched both recently.