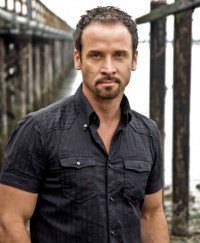 Recently GateWorld announced actor Colin Cunningham had agreed to do a recurring column with us, and we asked you to send questions his way.

The response has been overwhelming — enough that Colin can’t get to every question immediately.  If you don’t see your question below, don’t worry!  He’ll get to it.  Colin’s current projects and schedule mean fitting the column in when he can, not by any type of expected length or deadline.

So, without further delay … Colin, the floor is yours!

Hi, everyone!  Thanks for all the questions!

Bart from Belgium (and many, many, many others) writes:   Don’t you think the writers should have considered a promotion for Major Davis by now? When we first saw him, Sam was still a captain, when we last saw him, this captain had been promoted to Colonel. It doesn’t seem fair that the Major didn’t get a single promotion in all that time …

Well, it never happened and I couldn’t tell you why.  It’s definitely a writer question.  Me?  I was just happy to be there.  They could have demoted me to Sergeant and I’ve have been just as happy.

Syfygyrl writes:  How did you end up becoming Davis? Did you audition or were you offered?

I did audition. I’m pretty sure that we all did. Only with Davis, it had to have been my 12th audition for the show. I’d auditioned for everything under the sun, until Davis came along.

Michael writes: Would you have any interest in reprising your role as Davis on Stargate Universe through the communication stones? If so, what do you think Davis could contribute to the story?

I’d love to reprise the role of Major Davis on Universe.  I dig Universe.  But again, that’s for the writers to make happen.  I appreciate the thought, though.

Joel writes: When will Centigrade be available on the Australian iTunes?  Is there any progress with a feature-length version?

Joel, I’m really surprised that it isn’t available in Oz.  I’ve heard of a way that you can “trick” iTunes and buy stuff from other iTunes countries, but I don’t know offhand.  Sorry, man.  All I can say is maybe give them a shout.  Hopefully, they’ll write you back.  Or grab me at one of the cons and I’ll see if I can get you a copy.  ;)

Alicia writes: If there was an episode of Stargate about “A Day in the Life of Major Davis”, what do you think would happen during the course of his day?

A “day in the life,” huh?  I would think that with all the information Major Davis is privy too, I doubt he lives a very comfortable life. As in, not very peaceful. When you are intimately aware of everything out there that wants to destroy your country or world, I doubt he sleeps very well at night.

Gotta go for now, but keep the questions coming, guys!  When I’m not so slammed, I’ll try to respond a little lengthier.  And thank you for the questions!

Thanks, Colin! If you have a question for Colin, e-mail him at [email protected].  As a rule, please use respect in your submissions. Keep watching GateWorld as more answers from Colin will be coming soon!

Great column! It’s great to hear that a Stargate alumnus thinks highly of the new show. I was getting a little tired of hearing Shanks’ and Cliff Simon’s strange and (IMO) unfounded criticism of SGU. Not to mention Flanigan using his kids to call the show “boring.”

Nice column indeed, and I agree with GaussHog and Gaeth above totally.