From left: Damian Kindler, Amanda Tapping, Robin Dunne, and Martin Wood at the TCA event in 2008.

The new series will reimagine the popular story of Robin Hood … only set in the 23rd century. In Sherwood, “a young man of privilege teams up with a misfit spaceship crew to right the wrongs of his family,” according to the press release.

Kindler is writing the pilot for the show, to be produced by My Plastic Badgers Prods. with Kindler, Wood, and Tapping as executive producers.

Kindler formerly served as a writer on Stargate SG-1, from Seasons Six through Eight.

Wood was a long-time director for Stargate SG-1 and Atlantis, while Tapping has appeared as Samantha Carter on all three incarnations of the Stargate franchise over the past 13 years.

The three teamed up three years ago for Syfy’s Sanctuary, now producing its third (and first full, 20-episode) season.

Sherwood is a part of Syfy’s development slate of new programming to be announced soon, and there’s no indication just where it’s at in the pipeline.  Not everything that Syfy puts into development makes it to camera or to air.  But we’ll keep our ears to the ground and report on future developments!

Meanwhile, Season Three of Sanctuary premieres alongside the new season of Stargate Universe on Tuesday, September 28.

Amanda Tapping Livestream Interview and AMA Coming In May→ 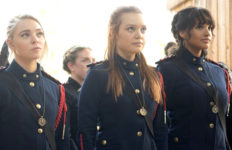 I just hope it’s better than the version they have on the BBC. Bleh.

With those three very talented people at the helm I would definitely give it a try. :)

how will the sanctuary powers that be have time to do this, with sanctuary pre production/filming/post production taking so much time?

Not sure what I think about this, as I really like this group of people, but in the past American versions of Robin Hood have kinda missed the point of the legend :s

@Fitzretsil: The Errol Flynn one didn’t miss it.

I’m glad that SyFy now has two space based shows in development – Sherwood and Orion. We need more space adventure and people actually having FUN exploring the universe.

@asecooper222 Canadians are Americans too, sort of. ;-D

I like everyone involved in this…but not keen on the idea. I think I’m gonna be giving this a miss.

I’m really super excited about this, not the least of which reasons is Amanda Tapping’s involvement.

AT took some of the best people from SG1 and SGA with her when she left…smart woman! Nice to see a woman developing and producing shows… yaaay for her! :D

@ Pioneering … actually as a Canadian I don’t see myself as American in anyway.

In regards to Sherwood, it sounds like an interesting premise and am willing to give it a try. Love Amanda and always thought Martin Wood was a great director. I wish all three of them luck with this new endeavor.

I am Canadian myself (which is why I love seeing shows like Stargate and Sanctuary succeed) and I don’t think we’re American other than the fact we live in North America :P

Well, this should be interesting- can’t wait to see how the projects turn out!

Robin Hood has been done to death. Not too keen on the premise. Maybe a totally new show with new ideas would be better?

Love the guys and I’m glad they have another show to go into production and I hope it is a success. I’ll watch if able but it sounds very much like Firefly by the description. A privilaged young man (Simon Tam) teams up with a misfit spaceship crew (Serenity crew) to right the wrongs of his Family (River Tam) I’m sure it will work out and only be similar on the surface.

At first when I saw this article, I thought, not another one! But I see it’s set in 23rd century so OK, let’s do this! I hope they do a good job and remember to include some humor!

So it’s a Robin Hood… IN SPACE.
Classic waiting to happen

It’s great to see this team of Stargate alums growing professionally. I wish them success!

Haha. I love how there’s a side thread going on abboot the Canadian thing. Hear me. I’m American. Live in Detroit. Windsor is a stone’s throw away. Canadians rock. We have a lot in common culturally. I like to think of Canadians as our American cousins. A little neater, and more polite than us Americans. It’s kinda like the Sodan and Free Jaffa. Both have much in common but you wouldn’t call a Sodan Warrior a Jaffa now would you?

Oh don’t get me wrong, we do have alot in common, but what I mean is, while in the UK, the English and Welsh for example or English and Irish have things in common, they are also distinct in their own way. I’m not offended by the term American, I just think we both have similarities and differences :)