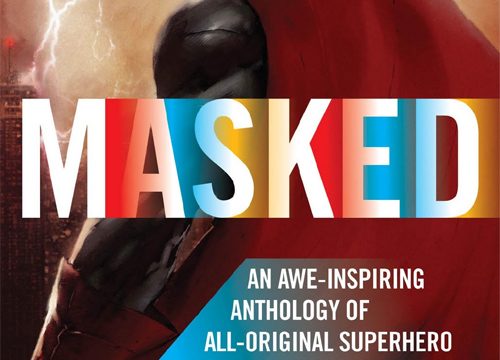 Stargate Universe producer Joseph Mallozzi is a proven wordsmith when it comes to writing screenplays, but Mallozzi recently took his first leap into the world of prose with his first published short story, “Downfall.”  The story appears in the recently published anthology Masked

, a collection of original superhero fiction that Publishers Weekly praised as “a solid anthology that provides first-rate entertainment.”

“I have long harbored a desire to switch gears and try my hand at writing prose,” Mallozzi told Gateworld. “The only thing that stopped me from, say, tackling a novel, was my time-consuming commitment to Stargate. That and the fact that writing prose is really, really, really hard. Oh sure, scriptwriting is tough as well, but it’s a different kind of tough.

“Side-stepping into the world of prose fiction would have probably remained just another of my failed dreams alongside winning Survivor and becoming the starting right cornerback for the Oakland Raiders if it were not for my friend, editor Lou Anders, who dropped me an e-mail sometime last year to tell me about his upcoming all-original superhero-themed anthology and gauge my interest in contributing a story to the collection. Initially, I wanted to politely decline, figuring it would be one long exercise in frustration that would, in all probability, yield less-than-stellar results.  But after further consideration, I decided “What the hell!”  If anything was going to motivate me to try my hand at prose fiction, this was it: an invitation from an editor I highly respected, a deadline, and, coincidentally, an idea I had for a graphic novel that I’d filed away years ago.”

Anders, the 4-time Hugo Award nominated editorial director of Pyr Books, told Gateworld that Mallozzi’s story exceeded his expectations. “I’ve worked with people in TV before,” Anders said, “and the ability to write a television script and the ability to write a novel are two completely different skill sets. It can translate, but there’s no guarantee it will.  I was expecting a competent story with a beginning, a middle, and an end that hit all the right points and was good, but I didn’t expect to be so blown away. He really has a gift for prose. It would be a shame if he never wrote more prose, because this stuff sings.”

Mallozzi described his story as the tale of  a “former supervillain who is pulled out of his quaint, suburban retirement to help the FBI investigate the mysterious death of a grandstanding superhero known as The Imperial. Amid the capes and cowls and super-fueled showdowns, it’s a story about identity, necessary secrets, and the power of relationships. The idea for the story came to me years ago and I’d considered some day pitching it to Dark Horse or Vertigo whenever Stargate wrapped.

“I was inspired by my lifelong appreciation for ‘bad guys,’ and a deep-seeded disdain for heroes.”

The process of writing the story increased Mallozzi’s respect for writers who make their living through the printed page. “I’ve always had nothing but respect for those who make a living writing prose fiction,” Mallozzi said, “and my experience with ‘Downfall’ has greatly increased that respect. It takes me about a month to write a script from concept to shooting draft: a week to spin the idea with my fellow writers and beat out the story, a couple of weeks to write a first draft, and another week to incorporate everyone’s notes and complete my rewrite. One month. It took me 10 times as long to write ‘Downnfall.’

“When writing a script, you get the plot and moves down, and then it’s a matter of finding the dialogue in the individual scenes. When writing prose, you get the plot and moves down (or find them along the way), but in addition to finding the dialogue in the scene, you also have to set the tone by describing the scene itself. Shot directions in scripts are quite simple: “Greer and the guard fight. Eventually Greer gets the upper hand and knocks him out.”  The descriptive passages in short stories and novels, on the other hand, demand the same loving care and attention bestowed upon the dialogue.  Every sentence, every paragraph needs to sing.”

Now that Mallozzi’s first prose work is available for his fans to read, does he plan to write more fiction?  “I have an idea for an SF novel,” Mallozzi said. “I’ve been kicking around for about a year now, one that holds the promise of a bizarre premise, colorful characters, and healthy doses of humor — however, given the time and effort that went into ‘Downfall,’ the thought of actually writing a book is daunting, to say the least.”

Mallozzi is featuring his fellow Masked contributors on his blog. You can find guest appearances by Paul Cornell, Matthew Sturges, James Maxey, Mark Chadbourn, Daryl Gregory, and editor Lou Anders. The book will also be the topic of his blog’s book club in September.  Pick it up now at Amazon.com!

I plan to get a copy and read this book so I’m not able to comment on his story.
But, the “deep seated destain for heroes.” quote explains a lot of things, I think. :(

But Mallozzi HAS already published a book. I think it was, How to Speak Goa’uld (?) by Dr. Joseph Mallozzi, Ph.D. I remember a gag with a Bridge studio gate guard reading it when O’Neill interrupts her. You experts here will know what I’m talking about.

I wish Joe well in his writing, but I’m getting the sense that a lot of the Stargate veterans have been doing it for too long. How long can you do something and still be original, creative and focused?

@Mentat It was “Latin for the novice” From the episode “Window of Opportunity”.

[…] If you’re interested, editor Lou Anders and I discussed my story, “Downfall”, with Shaun Farrell over at Gateworld: https://www.gateworld.net/news/2010/09/joseph-mallozzi-breaks-into-print/ […]