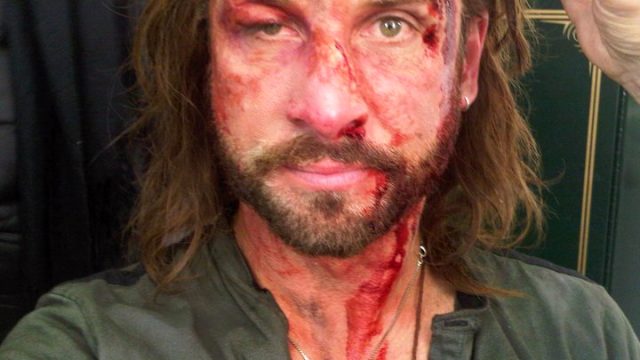 TNT has released the first trailer for its new science fiction series Falling Skies. Among the cast for the summer 2011 series is familiar Stargate face Colin Cunningham.

Cunningham plays John Pope, the leader of an outlaw motorcycle gang in a world devastated by an alien invasion. The series stars Noah Wyle (ER) and Moon Bloodgood (Journeyman, Terminator: Salvation), and is executive produced by Steven Spielberg.

The actor announced his casting in August via his Facebook fan page, and later posted a photo of himself from the show’s set in full, bloody makeup (above).

Cunningham played Pentagon liaison officer Major Paul Davis on the Stargate franchise off and on since Season Two of SG-1.  He most recently appeared in the series finale of Stargate Atlantis, “Enemy At the Gate.”

“It’s a fantastic part with an incredible cast that includes Noah Wyle, Will Patton and Moon Bloodgood,” Cunningham said. “I didn’t want to wave any flags until I’d at least finished my first few weeks of shooting, for as I’m sure you know, this business can be quite precarious. Nothing’s really a done deal until, well … until it’s a done deal. That said, I’m still hoping all goes well. But so far, so good.

“From Centigrade to Living In Your Car to Falling Skies. I really am one of the luckiest actors alive.”

Falling Skies premieres in June on TNT in the United States. Check out the network’s official Web site for more on the series.

i cant believe they are putting this on tnt after they killed crusade.

Well, at least it isn’t on Syfy.

“executive produced by Steven Spielberg.” Spielberg has had a hard-on for aliens since ET, and even that wasn’t that great when you really think about it. Spielberg did Taken, which is another sci-fi mini-series about aliens, and it was not bad. But this, just looks like it was fan-produced to me.

I wish Colin Cunningham the best of luck, but to go from Stargate to this, is kinda of a downward spiral.

Congratulations to Colin Cunningham for landing the part. I wish him and his new series the best of luck.

I remember this trailer, at first I wasnt interested but then I saw major davis and I knew I have to watch this at least the pilot.

Totally unoriginal. Won’t last a season, assuming it gets a go after the pilot.

Trust Major “Disaster” Davis to become a part of an alien invasion/end of the world type program.

@brindy You haven’t even seen the show yet and you’re dismissing it. Very negative of you.

This looks great for tnt.

I can’t wait til this show starts.

You know it’s quite sad that Major Davis hasn’t been promoted in over 10 years whilst his contemporaries like O’Neill, Carter, Mitchell, Sheppard all moved up that ladder.

Bet he’s glad some other aliens invaded and offered him a career change!

Cool … Colin has always been very personable and likable at the conventions. I wish him well. … And yes, I’ll be adding this one to the DVR queue to be sure and catch it.

@brindy give it a chance pal, i dont want to trade insults but people have become very jaded and hard to please it seems to me. dismissing a show on the trailer is short sighted, and not allowing a story to build over time like it did on SGU just results in sci-fi by numbers, have patience my child.

That doesn’t bode well for him appearing on the second season of Living in Your Car. Shame, I really enjoyed him in that.