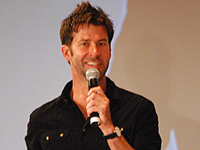 For fans of Stargate, the month of April and the province of British Columbia in Canada can only mean one thing:  CON TIME!!

For the seventh consecutive year, Creation Entertainment will be hosting the mother of all Official Stargate Conventions in the TV franchises’ home city, Vancouver.  The con, once again being held at the Metrotown Hilton in Burnaby, is set for April 14-17.  But for the first time ever, GateWorld is teaming with Creation to give one lucky winner (and their guest) the chance to attend the convention in style.

Typically, guests for the Vancouver convention can and have been added up to a week prior to the event — but Creation has already amassed a formidable line-up of stars from all three series.  Other names will be announced leading up to the event, but those already announced include:

Through the generosity of Creation, GateWorld is giving away a pair of Gold Weekend Passes to the event.  Those familiar with Creation conventions know how inclusive these tickets are.  But for those who may have never been to a Creation convention, an explanation is in order — especially since the Vancouver con features other additional perks.

These two gold passes are valued at over $1150, and will provide the winner and their guest with:

Members of GateWorld’s editorial staff will be there — would you like to be there, too?  Then simply head over to the contest thread in the GateWorld Forum and answer the question “Why is Stargate important to you?”  Register first if you’re not a member of the forum yet. It’s quick, and it’s free! (Remember that if you already have a GateWorld account for commenting here on news stories, you still need a separate account on GateWorld Forum to post over there.)

We’ll randomly choose a winner on February 18, and they will be notified via the forum.  You must be 18 years or older to enter, and only one entry per person, please.  Duplicate entries will result in disqualification.

IMPORTANT:  This contest provides the winner and guest with tickets to the convention only.  The winner and guest are responsible for all other issues involving con attendance.  Airfare (or other travel expenses), hotel accomodations and other incidentals are not included.  Please also note that since the convention is in Canada, any non-Canadian winner must also provide proper documentation to travel internationally.

An impressive line-up indeed.
Especially from the SGU actors. :P

:( unfortantely i just moved from Vancouver island to Edmonton. :( And i’m not 18 :P

Ironic? You think? All of these Stargate Actors in Vancouver now that their are no Stargate show in production now.

man. saw the new article, was hoping it was about SGU’s fate! :(

@Mentat:
They’re all “real” Stargate. Honestly this whole “True” Stargate thing (along with being a “true fan”) is nonsense.

@article:
If I had the money to cover travel expenses…If only, if only…

no use of me even trying, its almost two countries over. let me know when they have it in New York or there abouts with the same actors from SG1 and SGA Also why cant they have the con in summer/spring when its warm cause someday I will get to Vancover but only when its warm

Great lineup, especially from SGA, beautiful. Also great to have Teal’c there.

Admittedly I am also happy that we don’t see much from SGU. Greer ain’t that bad though.

anyone kow what happened to Richard Dean Anderson? at the end of Season 8 they show him, still Brig General of SG, but in the beginning of Season 9 he’s just gone! they say what the others are doing, but never tell ya what “Jack is doing and why he’s not Brg General of SG..