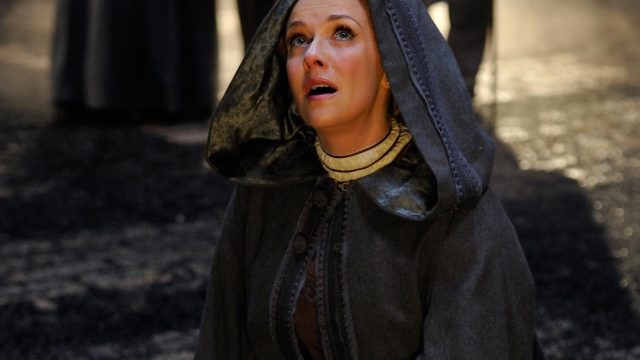 Season Four of the Syfy Channel series Sanctuary is on its way to DVD and Blu-ray this summer! The season — which may end up being the show’s last — will be released on July 17.

Amazon is now listing both the DVD

The 4-disc set will include all 13 episodes from the season, which aired last fall on Syfy Channel, as well as the usual bonus features.

Box art for this release has not yet made its appearance.

Tapping, of course, played Samantha Carter for more than a decade on Stargate SG-1 and Stargate Atlantis.

Syfy still has not announced whether or not it will bring the show back for a fifth season. Production usually begins in the springtime for a fall premiere, which obviously is not taking place now. Wood and Tapping are instead involved with producing and directing the new series Primeval: New World (story).

Stick with GateWorld for the latest on the series, and pre-order Sanctuary Season Four now to lock in the current price on Amazon — and support GateWorld with your purchase!

(Thanks to Scott for the tip!)

The box set art is available on amazon.co.uk and to date, every season set has matched its covers on either side of the Atlantic :-)
http://www.amazon.co.uk/Sanctuary-Season-DVD-Amanda-Tapping/dp/B007RO8WUW/ref=sr_1_4?ie=UTF8&qid=1335978458&sr=8-4

I would say Wood and Tapping saw the light and made their exit before SyFy did what they’re best at, which is cancelling shows.
I refuse to buy Season 2 of SGU on dvd, I suppose eventually they will put out a BluRay version.

@Imperious, what do you mean by “made their exit”?

@jimv1983, I probably shouldn’t have used that term, “moved onto other things” would have been better.

Wait a minute! Didn’t you guys just post the news about Sanctuary’s cancellation back on the 21st?
Yep, you sure did! Here’s the link:
https://www.gateworld.net/news/2012/05/sanctuary-cancelled-after-four-seasons/