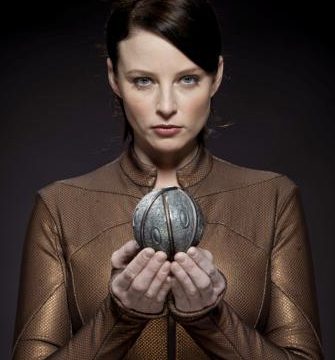 Several familiar faces are headed back to a TV near you in Continuum, a brand new science fiction series debuting this week on the Showcase channel in Canada.

Rachel Nichols (Alias) stars in the series as Kiera Cameron, a cop from the year 2077 who is swept back in time to the present day. Her mission is to stop a group of eight fanatical terrorists from the future, who are plotting to wipe out the future world as she knows it.

Stargate‘s Lexa Doig (“Carolyn Lam”) and Jennifer Spence (“Lisa Park”) are among the co-stars, as is Roger R. Cross. You may remember him better from 24, but back in the day Cross played Lieutenant/Captain Conner in the SG-1 episodes “The First Commandment” and “Spirits.”

Nichols recently appeared opposite Jason Momoa (Stargate Atlantis) in Conan the Barbarian. She played Rachel Gibson in the final season of Alias, and has also appeared on Criminal Minds and the feature film G.I. Joe: The Rise of Cobra.

As the series shoots in Vancouver, British Columbia, more familiar faces from our favorite Vancouver shows are certain to show up in the 10 episodes that make up Season One.

Check out the official site at ContinuumTheSeries.com, and visit the new show guide over on SciFi Stream.

Take a look at the trailer for Continuum below! The series premieres Sunday, May 27 at 9/8c on Showcase in Canada. We’re hoping for word on when viewers in the U.S. and elsewhere might be able to see the series.

Im looking forward to this show, hopefully it lasts…

I love Lexa! I hate Time Travel shows! Don’t know what to do!

will it be in the us

I also would like to know if we’ll be able to see this in the U.S.

SyFy (sadly) are curently in talks to air it in the states, one saving grace is that if it does well in Canada and bombs on SyFy and they cancel it, it’ll live on there

I’ll be looking forward to finding this on the SyFy Channel at some point.

Sounds a lot like Time Trax or TimeCop (the TV Series), both of which I enjoyed. Time Trax was better than TimeCop though.

Looks good enough for me to give it a try. I’m starving for a decent sci fi series.

It seems unbelievable that there was a time we had TV shows like SG-1, Atlantis and Battlestar Galactica on the same year, let alone the same night. While this is nowhere near that level in quality of those shows; I think I’ll like it more than: Eureka, Warehouse 13 or Sanctuary.

Watched this last night and it looks good, very cool. Nifty future tech, decent acting for a pilot and the last couple minutes revealed a very large story arc between the present/future (present/past?) timelime. Can’t wait to see more!!! And Vancouver gets to play itself for a change. :)

Got to say, the 2nd episode was better than the first. Not a grade A series, but definitely something i’ll keep watching.

Watched the 2 episodes last night, I will say it sure does have potential. The acting is pretty good and obviously will get better with time. I would like to see more filming in the future not the present but who know’s might turn out to be like Sliders but in the concept of trying to get back to the year they came from!

Soforizo, you brought a tear to my eye when you reminded me of the glorious days of SciFi Friday! I doubt we’ll ever see another night of great TV like that again!

This show has been for weeks and I never once saw a single preview for it on American TV.