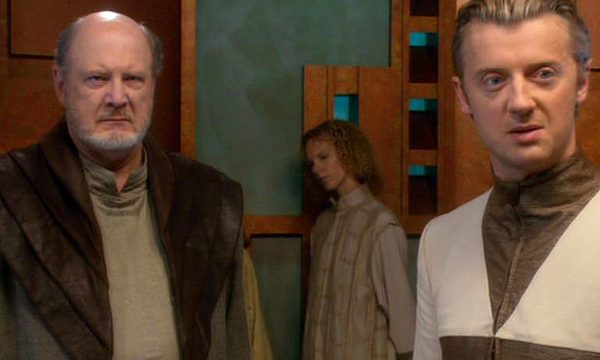 ‘Atlantis is leaving this planet.’

It’s hard to believe, but the Stargate Rewatch has been going strong for one full year! It’s a major milestone in the Stargate fan community’s worldwide project to revisit the whole of the Stargate franchise — all 17 seasons and three movies. And it’s not too late to join up.

In August we’ll be rewatching Season Three o Stargate Atlantis. This was an important year for the series, which introduced a key antagonist in the Asurans and provided a key backstory for the origins of the Replicators. We also said an unexpected goodbye to a beloved team member.

We want to hear from you! If you are blogging about your Rewatch, writing new fanfic, creating artwork, or doing something else related to Atlantis Season Three, e-mail us a brief description and a link.

Here’s your introduction to Season Three, including links to all the good stuff we’ve collected here at Gateworld! Click here to learn more about the Rewatch and how you can join us now. 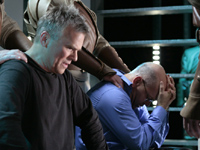 As the third season opens Ronon and McKay are captives of the Wraith, who have stolen the location of Earth and are on their way. In order to stop them the team must collaborate with Michael, the hybrid they created but who now realizes the hive can no longer be his home. Dr. Beckett made progress on his retrovirus, and an introduction to the Asurans would put Dr. Weir’s life on the line and lead to the loss of Atlantis itself.

Season Three would also force Ronon to relive his difficult final days on his home planet of Sateda. Colonel Sheppard would have to put his trust in a Wraith to escape the clutches of Commander Kolya, and Rodney faced almost certain death if he did not figure out how to ascend. 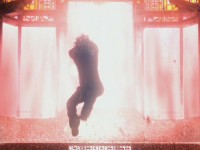 Come back in a couple of weeks to cast your ballot for July’s Stargate Atlantis Awards!

Key back story for the replicators? Maybe, more like giant hole in their back story in which we’re left to fank wank in

Too bad I can’t rewatch since Netflix decided to drop Atlantis.

WTH, I’m doing a full watch through so I can watch SG-1 and Atlantis the way it played on television (back to back). But Atlantis wasn’t on Netflix. Maybe it’s just something that will be fixed in a few days like once happened with the SG-1 movies. If not, this fan is gonna be mad! lol. Might have to switch to Amazon Prime.

Amazon Prime – so worth it!
This season had some great episodes and some I don’t even remember. Need a rewatch.
Netflix are nuts.

Heh, I haven’t even started to rewatch Stargate! I have watched all my Stargate Sg-1 DVD’s, Stargate Atlantis DVD’s and Stargate Universe DVD’s and the three movies SO MANY times that it’s better to take a break. But awesome series all of them! Finland’s tv has ONLY showed 6 seasons of SG-1…nothing more! So heck yeah I got the DVD’s! Hope they would make more movies or something!

I would like to apply to the owners of this portal with the request. Please pass to all the creators SGU that all fans of the show from eastern Europe and northern Africa dreaming to see the continuation of the show. Because now it is not only an international show, but show for the whole world. You and we, have nothing to compare with this show.

I wonder why the show is now off of Netflix. Funny thing is, I just got the series on DVD at the end of July. Psychic, maybe? =)

oh yeah season three SGA, definately one of my favourites and they continue SGU i miss watching new episodes, ut of course nothing compares to the original, life wouldn’t be worth living it :)

I have seasons 1-3 on DVD, but I just realized that the whole SGA series is mysteriously off Netflix. It used to be in my instant queue, but now it’s gone. Is this recent or has it been off for awhile? And does anyone know why?

I just searched Hulu thinking that they might have SGA, they do not. However, I just watched a 5min clip from The Jace Hall Show (I’d never heard of it) but it was from 2009, they toured Bridge Studios with Brad Wright, including the Atlantis set. Wright said, “here is proof that we still plan on doing a movie,” since the Atlantis set was still standing. He also showed the coin they used to decide if seasons continue or not. I am so sad that that coin came up tails on the SG1 & SGA movies and season 3 of… Read more »

You can watch SG1 through Netflix. It is available with there CD service of $7.99 a month