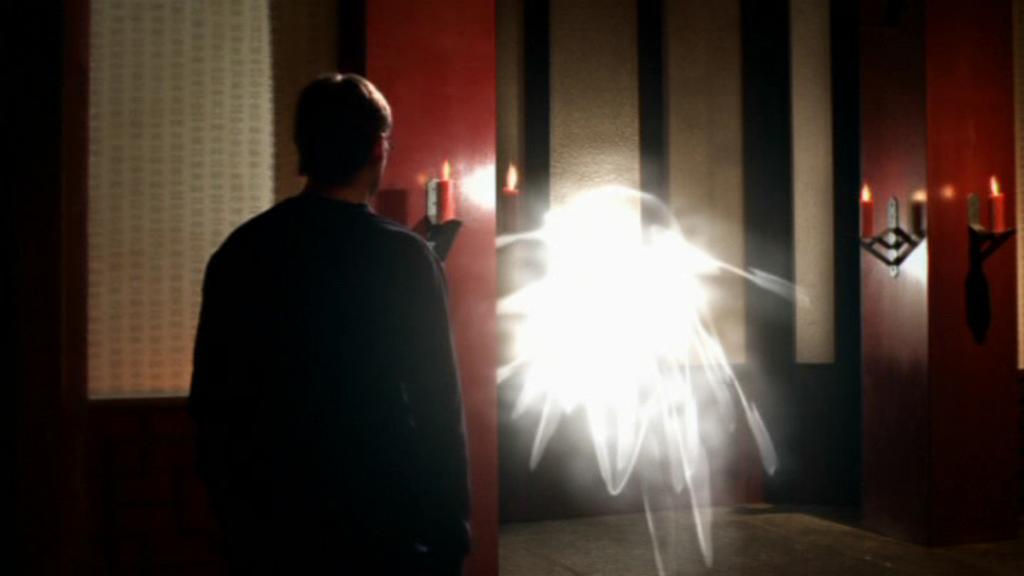 A term used to describe the process of transcending to a higher plane of existence. Ascension has been accomplished by the Ancients, and a number of other beings they have assisted. The Ori, who were once a part of the same mortal race as the Ancients (when they were known as Alterans), also learned to ascend.

One ascended being in particular -- Oma Desala -- has made it a personal quest to help others ascend.

Ascension is a difficult process not easily accomplished. While some, such as Rodney McKay, have attempted to calculate the scientific means by which ascension may be accomplished, many others believe that there is an incalculable, spiritual component to it. In short: "You must release your burden," as Oma Desala once told Daniel Jackson. A key to achieving ascension seems to be the casting off of connections to the mortal world, acknowledging one's faults and failures and yet recognizing that one has done his or her best.

While this can be done on one's own, in theory, ascension is much more easily accomplished when helped by another ascended being. This is why the banished Goa'uld Anubis was able to ascend, by tricking Oma into believing he had been reformed.

Those who do attain ascension possess what we might describe as supernatural abilities, including the ability to control the weather, to appear to mortal people, and more. Ascension does not, however, make one instantly all-knowing or all-powerful -- and while they see much and know much, ascended beings remain spatially located in one particular galaxy.

Maternal Instinct - SG-1 discovers the world of Kheb, where Oma Desala and another of her kind teach Daniel the powers of ascended beings.
Ascension - Samantha Carter is followed home by Orlin, an alien lifeform who is smitten with her -- and who reveals himself to be an unascended being.
Meridian - After suffering exposure to a lethal dose of radiation, Daniel Jackson is visited by Oma Desala and taught to ascend.
Abyss - Daniel visits Jack in a Goa'uld prison cell, where he tries to convince the colonel that ascension is his only hope of survival.
Full Circle - Daniel Jackson realizes that the ascended beings are the Ancients, and is stopped from attacking Anubis -- once ascended himself -- by Oma Desala or the others.
Fallen - Daniel is returned to human form by the Ancients, who have passed judgment for his interference in mortal affairs.
Orpheus - Daniel has flashbacks recalling moments from his time as an ascended being, leading the team to try and rescue Bra'tac and Rya'c from a Goa'uld labor camp.
Lockdown - Still half-ascended, Anubis's phantom form passes from person to person inside Stargate Command as he tries to escape through the Stargate with a new host body.
Hide and Seek - The Atlantis expedition discovers a non-corporeal creature being held in containment in the city, which the Ancients were studying in their quest to reach ascension.
Threads - Daniel encounters Oma Desala and the Ancients after he is killed by Replicator Carter, and convinces her to stop Anubis by any means necessary. Oma and Anubis are locked in eternal combat on the ascended plane.
Origin - Daniel and Vala learn of a second group of ascended beings, who share a history with the Ancients: the Ori, who demand that mortals worship them.
Prototype - SG-1 finds Khalek, an experiment of Anubis's who possesses the Goa'uld's genetic memory and who is on the cusp of ascending.
The Fourth Horseman, Part 1 - Orlin returns from ascension as a child, to help SG-1 fight a plague unleashed by the Ori. He tells the team that the Ori receive power from those who worship them, and that the Ancients won't intervene in their attack.
Epiphany - Sheppard is trapped in a time-dilation field with a group of people trying to achieve ascension, and helps them overcome the final hurdle.
Progeny - Atlantis meets a civilization of Replicators created by the Ancients, including a group led by Niam who wish to learn how to ascend -- like their creators.
Tao of Rodney - After he is given super powers by Ancient technology, Rodney must try and ascend in order to avoid dying as a result of his exposure to the device.
The Pegasus Project - Daniel and Vala meet Morgan Le Fay, an ascended Ancient posing as a hologram in Atlantis.
The Scourge - Daniel sends Merlin's anti-Ori weapon through the Supergate in a plan to wipe out the ascended Ori.
Dominion - Adria successfully ascends, making her more dangerous than ever.
This Mortal Coil - Niam's group creates a copy of Atlantis and human copies of the Atlantis team, in the hopes of learning the secret to ascension.
Stargate: The Ark of Truth - After the Ark of Truth takes away Adria's power base (those who worship the Ori), Morgan attacks her, and the two ascended beings are locked in mortal combat for all eternity.
Ghost In the Machine - A group of disembodied Replicators led by one claiming to be Elizabeth Weir arrive in Atlantis, seeking bodies after their attempt to ascend artificially failed.