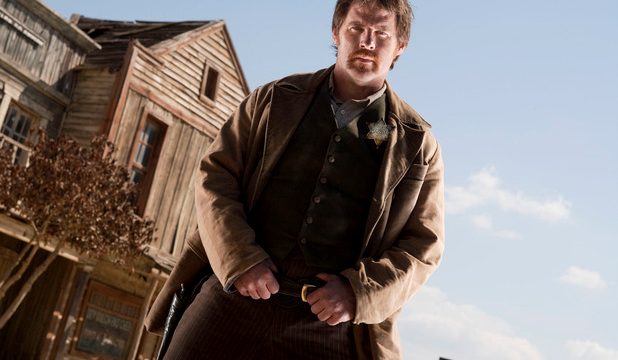 Stargate SG-1‘s Ben Browder is headed to the Old West for a rendezvous with another science fiction legend.

Browder guest stars in “A Town Called Mercy,” this week’s brand new episode of Doctor Who. He plays a cowboy named Isaac, who lives in the dusty town that is under siege by a relentless cyborg. When the Doctor, Amy, and Rory arrive, the Doctor is conscripted to be the town’s reluctant sheriff.

The episode is penned by Toby Whithouse, creator of the original U.K. version of Being Human.

In addition to his four years as John Crichton on Farscape, Browder played Colonel Cameron Mitchell in the final two seasons (and two DVD movies) of SG-1.

Doctor Who stars Matt Smith, Karen Gillan, and Arthur Darvill, and airs Saturday, September 15 at 9/8c on BBC America and Canada’s SPACE, and at 7:35 p.m. on BBC1 in the U.K.  Check out more photos at Digital Spy, and watch the trailer below!

Sounds great – Wish I could get Dr. Who on my cable.

It’ll be good to see him in something again. The last time I saw him was back in January, guest starring on “Chuck”. Before that … I think it was “Stargate Continuum”, actually.

Saw the episode and it was great to see Ben on Doctor Who! Though he looked great and did great as the town sheriff! The Mustache was very sexy…lol

that was a good espisode

I’m not too fond of “Western” episodes in scifi (Data’s day? and the Enterprise episode – nah). And this wasn’t my favourite Doctor Who show. Good to see Ben again though. What’s with his hair?? Looked like wig…