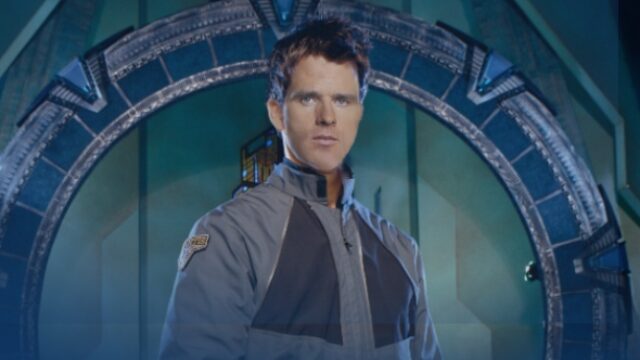 Before he joined the cast of Stargate SG-1, we knew and loved Ben Browder as Farscape‘s displaced astronaut John Crichton. The Memphis, Tennessee-born actor starred on the SCI FI Channel original series for four years, playing one of the truly great characters of science fiction and making him a household name among genre fans.

Of course, as Farscape fans we were elated when Browder was subsequently cast as a new series regular on Stargate. It was 2005 and long-time leading man Richard Dean Anderson (“Jack O’Neill”) was retiring, and the show’s producers were on the lookout for another actor with name recognition to replace him.

Browder won the role, and proved his Stargate bona fides by binge watching all eight seasons before showing up for work. For the final two seasons of SG-1‘s run he breathed life into Lt. Colonel Cameron Mitchell, a newcomer to Stargate Command who matched his enthusiasm with courage and heart.

But it almost didn’t happen. Browder almost wasn’t cast as Colonel Mitchell … because he was up for a different role on the franchise one year earlier. Two of them, in fact. 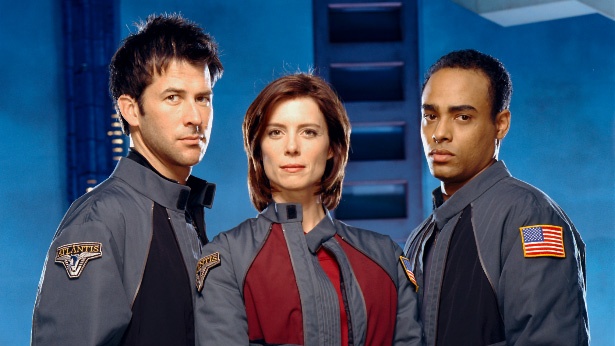 The first was Major John Sheppard, the leading man on the new spin-off Stargate Atlantis. Atlantis was casting late in 2003, targeting a shooting date in early 2004. The show had a tight schedule in order to make the network’s planned summer premiere.

Browder was a favorite for the show’s producers, but ultimately he was not available — because he was back on Farscape, filming the wrap-up mini-series event The Peacekeeper Wars at the time.

“Ben would have made the perfect John Sheppard as originally envisioned in the Atlantis pilot – a Southern cowboy with swagger,” writer and executive producer Joseph Mallozzi said on his blog. “The fact that he was shooting the Farscape miniseries took him out of the running.”

Ultimately Atlantis‘ producers would strike gold and find their leading man in Joe Flanigan, who more than made the role his own. He stepped into the role of Major Sheppard, playing the character for the show’s five-year run. 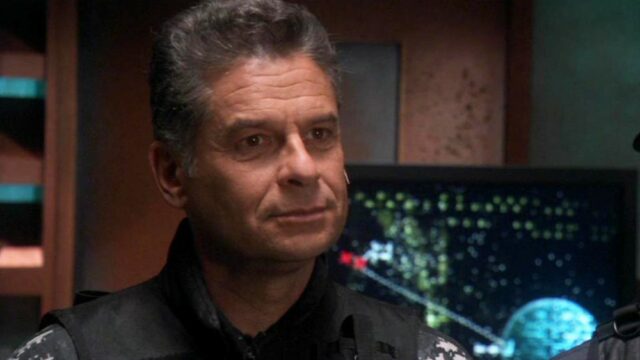 Mallozzi wasn’t done trying to get Ben Browder on Stargate, however. As Atlantis‘s freshman year drew to a close, he wrote the part of a major guest star for Browder. Colonel Dillion Everett led a team from Earth that gated to Atlantis and helped to defend the city from the Wraith siege in the season finale (“The Siege, Part 2”). The casting call for Everett’s character indicated he could become a recurring character on the show.

Once again, however, Browder wasn’t available. Instead the part went to actor Clayton Landey. Colonel Everett ended up wounded in combat, and returned to Earth in the next episode.

“Needless to say the character’s arc would have been significantly different had Ben been available to take the role,” Mallozzi added. 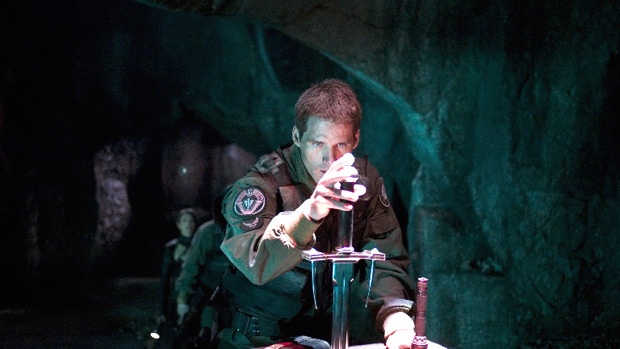 Of course Browder was available when another permanent role came up the next year. Cameron Mitchell was to be a series regular on Atlantis‘s parent show, and a member of the SG-1 team. In joining the team Mitchell came off a tour as an F-302 fighter pilot, putting him at the crucial battle with Anubis’ forces over the ice of Antarctica (“Avalon, Part 1”).

Even sweeter: with co-star Amanda Tapping out on maternity leave at the beginning of Season Nine, Browder’s Farscape co-star Claudia Black would appear along side him as the sultry thief Vala Mal Doran for a six-episode arc.

Given that Farscape and Stargate SG-1 previously aired together on the network, it might have been a bit strange for viewers to see both John Crichton and the radiant Aeryn Sun turn up at Stargate Command. But, as it turned out, the bigger concern for the studio was that many people thought Browder and SG-1‘s Michael Shanks (“Daniel Jackson”) looked too much alike.

Their solution? Shanks began the new season with a beard, in order to help distinguish Colonel Mitchell in the minds of casual viewers. 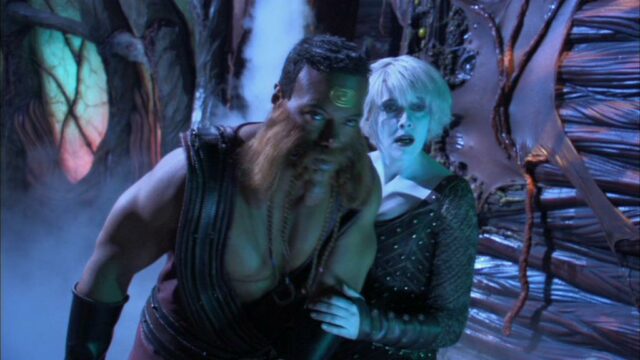 Stargate would go on to spoof its SCI FI sibling with a short Farscape bit in the show’s two-hundredth episode (now with Browder and Black both on the cast). Amanda Tapping appears as Chianna, Christopher Judge as D’argo, and the animatronic puppet Thor as Dominar Rygel XVI!

But to mix things up, for fun Browder played Paul Goddard’s role of Stark — and Shanks appeared in the bit as John Crichton, a nod to the idea that he and Browder look alike.

Browder threw himself into his Stargate role, making his work ethic apparent to the cast and crew from Day 1. “We’ve all been amazed by Ben’s commitment to the show and the Cameron Mitchell character,” Mallozzi said at the time. “Here’s a guy who, rather than retire to his trailer or go home early, will stick around the set to help the other actors or come up to the production offices and discuss scripts. He’s very insightful, very smart, and always looking to improve what’s there. He tries to be as involved as he possibly can in all facets of the production.”

The rest is sci-fi history! But once you know this bit of Stargate’s past, it’s tough not to wonder … what would Atlantis have been like with Ben Browder as Major John Sheppard?

He would have been great in the role. I think that his character and Joe Flanigan’s character in Atlantis were similar. Not interchangeable, but similar.

While you can never truly replace the OGs, i thought that Ben and Claudia brought some new energy to the show. It also helped that the shift to the Ori story also brought a freshness to the show. I could have watched another 3+ seasons of the Ori story arc. Beau Bridges was great as Gen Landry. Just over all, i’m a big fan of Seasons 9 & 10.

As an absolute 100% Stargate fan…I do not believe things could have worked out better. Browder was perfect as Mitchell, Flanigan was perfect as Sheppard and I’m not trying to cast aspersions on Browders acting abilities that I have greatly enjoyed…but I cannot see him as Sheppard.

Is it weird that more than a decade later I still hate and feel let down by the stupid 200th episode of sg1? Seeing as it’s the lowest rated and least watched episode in stargate history I doubt it.

I always skip that episode when I am rewatching the series…but it doesn’t detract away from the rest.

I thought it was fun. It was never meant to be taken seriously.

Why did you hate it? I think it’s one of their weaker episodes but it’s not supposed to be a serious one either.

I would’ve loved to see Ben Browder as AtlaNtis’ lead, but I’m so glad that he wrapped up Farscape instead.

I agree although I wish they had given Farscape their 5th and final season liked they planned.

I would have loved Ben as Sheppard because it would have gotten us more Ben on our TVs. However, I really enjoyed Flannigan in the role.

I’m not saying Ben Browder wouldn’t be a good John Sheppard but I can’t imagine anyone other than Joe Flanegan playing him.

Darren, can we call Cam “sultry” too? Vala was brave, devious, a risk taker, and at the same time, caring. 😊