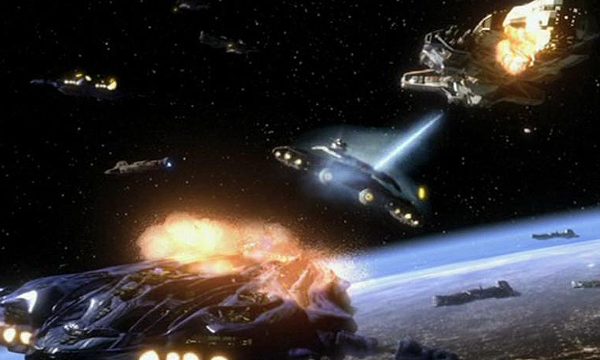 For more than a year now Stargate fans all over the world have been participating in the Stargate Rewatch — one season each month for 17 months! For September we’ve arrived at Stargate Atlantis Season Four — one of our favorite seasons with new directions, old enemies, and some stellar episodes.

Click here to learn more about the Rewatch and how you can join us all through this fall.

We want to hear from you! If you are blogging about your Rewatch, writing new fanfic, creating artwork, or doing something else related to Atlantis Season Four, e-mail us a brief description and a link.

Now here’s your intro to Atlantis‘s fourth season, with links to everything related on GateWorld.

After the Atlantis Expedition’s leader Elizabeth Weir is lost to the Replicators, Colonel Samantha Carter arrives to take command of the base. But the Replicators remain a potent threat, leading to an alliance of races and Rodney McKay’s brilliant plan to develop “Fran,” his own Replicator creation, to use against the enemy. Meanwhile, a prophecy foretells the complete destruction of Atlantis at the hands of the enemy.

Meanwhile, Todd (now recurring guest star Christopher Heyerdahl) and the Wraith are still hatching plans of their own. An alliance with Atlantis is followed by a deadly confrontation, and even the first successful attack on Earth when a Wraith commander figures out how to exploit the intergalactic gate bridge. And, of course, the hybrid creature Michael is lurking in the shadows with his own plans to shift the balance of power in the Pegasus Galaxy — exploiting Teyla and her unborn child to accomplish his goals.

Come back in a couple of weeks to cast your ballot for this month’s Stargate Atlantis Awards!

Where is the best Keller moment?

Nekomajin: Though Jewel Staite was technically a recurring guest star (and not a regular cast member) in Season Four, I’ve added that category in for nominations. Thanks!