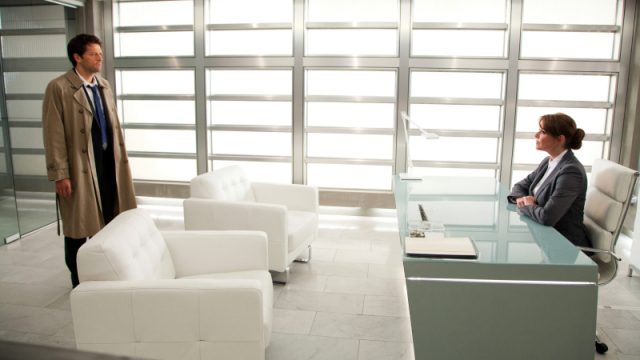 The first photos from Amanda Tapping’s upcoming appearance on Supernatural have arrived! (Beware of possible spoilers for the show.)

As we reported last month, the former Stargate SG-1 and Atlantis co-star will play Naomi, a member of a new group of angels and a recurring role on the fan-favorite CW series. Her first appearance will be in the November 14 episode, titled “A Little Slice of Kevin.”

Click on the photo to enlarge. (There is a second image with Amanda out of focus in the background, at TV Line.)

Head over to TV Line for more photos from the episode, and follow Amanda on Twitter @amandatapping. The eighth season of Supernatural airs Wednesdays at 9/8c on The CW in the United States.

very excited to see amanda on the series!! :D

Scene looks like it should be from ‘a little slice of apple’. Really looking forward to seeing Amanda in the show…Cas and Amanda, hopefully there is history.

Woah, possible massive spoiler alert? At last mention, Castiel was a) sealed in another dimension and b) possibly dead.

Shot could be from a flashback, but still, you could’ve cropped it or something.

Not exactly related to this, but I’m surprised that no one on GateWorld has said anything about Claudia Black guest starring on last night’s “Haven” episode, or in the second part airing next week (it’s a two-part episode). I’m also surprised that nothing was mentioned about Paul McGillion’s appearance on “Fringe” a few weeks ago. Are they not as important as Amanda Tapping, Ben Browder, and Joe Flanigan?

Kyle: There’s currently exactly one of us doing regular news coverage on GateWorld, and we can’t write up a piece if we don’t know about it. It’s not a slight toward any of the actors.

On a related note I’m expecting to be able to pick up a bit more news after the New Year.

Wow! its about time to have Amanda back on the small screen. I for one have missed her since the last ep. of Sanctuary. I hope that the film “A Random Act of Romance will run here in Wilmington NC.