The cable network is celebrating an astonishing 20 years on the air next month, and will air a two-hour retrospective on Monday, December 10 (9/8c).

Narrated by Dean Cain (Lois & Clark), the special will feature cast and crew from a broad range of past and present Syfy Channel shows — including several from Stargate:

Syfy (then SCI-FI) first went on the air in September of 1992, airing classic series in the science fiction, fantasy, and horror genres. It was among the first of the basic cable networks to enter the world of original scripted programming, launching shows like Farscape and First Wave in 1998/99.

As the network grew it came to the rescue of genre series that had fallen under the cancellation axe at other networks, including FOX’s Sliders, Poltergeist: The Legacy … and a little Showtime series called Stargate SG-1.

SG-1 premiered on SCI-FI with its brand new sixth season in 2002, alongside reruns of the first five seasons. The show garnered record ratings for the little network, and was largely responsible for a sustained ratings growth that pushed SCI-FI into the Top 10 of basic cable networks.

SCI-FI rebranded as the phonetically identical “Syfy” in 2009, as part of an effort to appeal to a broader audience. The move has largely been a success in the ratings and finance departments, with more reality programming and fewer hard genre shows — plus professional wrestling — making the network rather different than it once was.

Tune in for the retrospective on December 10. 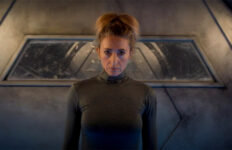 And look, there isn’t a single Stargate Atlantis or SGU star on the list! What the frackin’ heck? I supported these guys for so long but that is such a huge slap in the face to actors who put a lot of heart and soul into the franchise I can’t believe they have the nerve to air such idiocy. David Hewlett has directed a movie, Joe F, Torri H and multiple other alumni of these shows have appeared on their network and this is how they are treated? Sheesh, I’m so angry I could spit. And this is the last… Read more »

the special will feature cast and crew from a broad range of past and present – but mostly past – series. Why I don’t get about Syfy is they have all these great properties they are literally doing nothing with now. Eureka, Sanctuary, Stargate SG-1/Atlantis/Universe, Battlestar (unless Blood and Chrome goes somewhere other than the 2 hour web series that’s currently airing), Farscape…Syfy would make a LOT of people happy if they took some of those crappy Saturday movies and instead aired 2 hour movies off of their canceled shows like SG-1, Farscape, etc. Why not? It would go a… Read more »

So does the retrospective cover how the first 10 years the channel had good shows and in the last 10 has slid into just being a dump for wrestling shows, c movies, and bad reality shows?

how can one say pee on syfy without sounding pissy?

@Sylvia Amanda Tapping was in Atlantis :)

Besides, after Stargate was over on Syfy, there really was no other reason to watch.

@rsanchez1 No, I’m not. I’m genuinely angry over the snubbing and continued shoving of SGA into the closet, like they don’t even want to acknowledge it exists. And I loved that show very much. As did many. We are quite disheartened by this (what must be deliberate) oversight and not one of our favorite actors being included.

Sylvia, it is only a two hour show. I bet there is a reference to Atlantis but I think they are trying to fitin most of their series and sg-1 is the most recognize. If they included everything it would be an all day special.

Stargate Atlantis is its own distinct show, not just a left-over webisode of SG1. It deserves its own seperate recognition and while Amanda was on SGA for a short while, she wasn’t identified with it as she was with SG1 and Sanctuary. And I think she’s more representing Sanctuary on this special than SG anyway. I don’t buy for a moment that they couldn’t fit in ONE interview with David Hewlett, Paul McGillion or Joe Flanigan. They have many, many many guests (a sig number of Defiance guests which seems to show this special is simply a launch point for… Read more »

So I’m going to guess this 2 hour special is going to be all those Stargate actors reminiscing about the many times the show was nearly cancelled, and then how SyFy stopped playing anything remotely related to science fiction after SG-1/SGA/SGU.

If syfy’s normal way of treating a tv shows is to go by, this program will be cancelled before it even goes out on air.

Sylvia, you’re being ridiculous. You haven’t even seen the special, so you have no idea whether or not they snubbed Atlantis. I will never understand the melodramatic histrionics some fans are determined to display. It’s just a TV show.

Honestly they should do what Cartoon Network did with their anniversary and re-air some of their classics series in a marathon. Instead of doing a 24 hour thing, do a week long marathon. It’s December, and not a lot of people will be at home for original programming, so it’s a good time to bring back episodes of Sliders, Farscape, SG-1, miniseries, ang some of their rare critically acclaimed movies ( there’s hardly any but there were a few like the cube and earthsea).

Oooooh, I hope they show some really good wrestling highlights!!! Like a body slam or pile driver. Those are awesome….

I agree with vittles2012, that’s hysterical

Oh, how I miss SciFi Fridays! Stargate SG-1, Stargate Atlantis, and Battlestar Galactica all back to back. I doubt we will ever see such a great night of television again.

I too long for the good old days of Sci-Fi past.

And the special was as dismissive of SGA as feared. What a pot of crock.

What are you talking about. They mentioned it. It was part of the Stargate segment. Or did you miss that part

Yeah, they mentioned it. In passing. As if SGA only aired for an episode or two. (I was lucky to see a brief shot of Weir and then Sheppard.) While focusing almost entirely on SG1. SGA aired for 5 frickin years, as long as SG1 did on SciFi. The special got lousy ratings anyway, so LOL.

@Sylvia I, too, was about to suggest that you may’ve jumped on the anger button a tad bit too fast- since I assumed that you- like I and others- had not seen the aired special yet… …until, sadly, I saw that you were proved to be entirely correct. I’m sure everyone knows of my long-held bias towards all things SG-1, as opposed to SGA. But SGA was still a great Stargate show that I also happened to enjoy for five long seasons, and that special did SGA a severe disservice with only a passing mention of its existence as a… Read more »

Isn’t it funny that with current blockbuster movies such as Thor, Iron Man, etc. that we don’t have any great science fiction channel. SyFy is now just a garbage channel which cancelled fan favorites starting with FarScape (after renewing it) and ending with Stargate and BSG. I haven’t watched anything new of any value on this channel since then. Because of today’s low audience numbers even for hit shows the broadcast networks and cable will not take the chance on producing great science fiction as it is very expensive. Fans haven’t helped. They yell and scream when shows such as… Read more »

I miss farscape i want my farscape back in scfi channel.