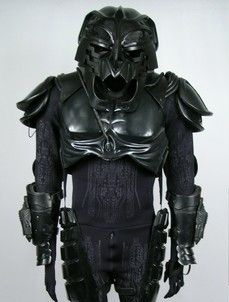 A pair of high-profile props from the set of Stargate SG-1 are going back on the auction block.

The original Kull Warrior costume (worn by actor Dan Payne) will be auctioned off in a live online event on March 22.

Alongside it is a set of original 23 production blueprints for the X-303 prototype battlecruiser, a ship that went on to a long life in all three Stargate series as the Daedalus, Apollo, Odyssey, and others.

The props were originally processed and auctioned by Propworx in the fall of 2010 and the spring of 2011.

They are part of a major “Hollywood Extravaganza” auction series running March 22 to 23, which also includes more than 1,000 items from The Lord of the Rings, X-Men, Pirates of the Caribbean, Blade, and more, as well as memorabilia from the likes of Stanley Kubrick, James Dean, and Michael Jackson. Head over to icollector.com for more details and photos, and to register to participate.