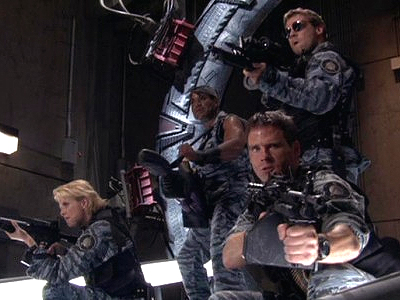 Multiple SG-1s show up at Stargate Command, leading the “real” team to conclude that they have each been inadvertently displaced from different parallel realities. And it soon becomes clear that one of these alternate SG-1 teams is working toward their own agenda …

Rewatch “Ripple Effect” this week! Then post your comments below, or head over to the “Ripple Effect” discussion thread and see what people were saying back in the day. What are your favorite moments?

Awesome ep!! Like all sg1 and atlantis eps. Is there any chance that series would continue? And how long you are going to keep this site up?

That’s a good question. But I would not ask about it. Because it is a bad sign. This means that you too, feel the end of it. Please do not. Save hope.

@RDA
Stargate sg1 and Atlantis won’t made again.
The Stargate franchise may be picked up again someday and have a new show or movie made but not in its current form.

Can’t speak for this site would need to contact the Editor for that.

Great episode a bit too much techno babble but Stargate has a lot of it.

Liked the interaction between the characters brought back.

Seems odd evil Mitchell would think the green wire scenario would occur in this universe since it hasn’t yet.

did they stop doing that unleashed game?

This would have been a perfect episode for a RDA cameo leading one or more of the alt teams through the gate.

That was a fun episode. What emotions would’ve been had seeing people that were dead…Janet and Martouf.

@RDA
I think the site is on its last legs, 3 years after the death of the franchise it seems that the people behind GateWorld finally gave up, they no longer bother publishing articles like they used to (like pickups or cancellations of sci-fi shows) and these pointless “episode of the week” articles are the only thing left.

It’s understandable but still depressing, it’s another nail the coffin for the Stargate franchise, not that it really matters, there are already more than enough nails in the coffin to make sure it will never be opened again :(

@ofer,i agree. but it’s not just the gateworld site…

the problem is something that came about b/c too many ppl said ‘NO!!’ to the ones that wanted more.

if ‘veronica mars’ can get a reboot, why the hayhoo can’t we?

*because we won’t let mgm know we WANT more!!*

I think that’s a bit much.
Gateworld seems to be doing what they can.

If that rumoured Stargate comic is published that may become a key in the site staying active.
I will certainly be buying the comic to let whoever is watching the sales know I am still very interested in Stargate

I didn’t mean to criticize anyone at GateWorld, this site have been my number one source of information to anything Stargate related for the past 5 years and I always considered it a very professional site with a lot of interesting articles, I appreciate everything the people behind this site have done over the years and continue doing it’s just that seeing GateWorld so vacant (from articles and readers/commentators) is depressing and I consider it another indicator that Stargate won’t be coming back.

GW is currently in “hibernation mode,” in my mind. Of course we have no intention of shutting down the site — so long as we can pay the server bills, that’s not on the table. But there isn’t all that much to report … plus, I don’t have much time to commit to creative new features these days. So, hibernation. We’ll continue to report Stargate-related news as it happens. I am entirely convinced that Stargate will come back. It’s only a matter of time, and only a question of what format (movies, TV, Internet, etc …). When it does, we’ll… Read more »