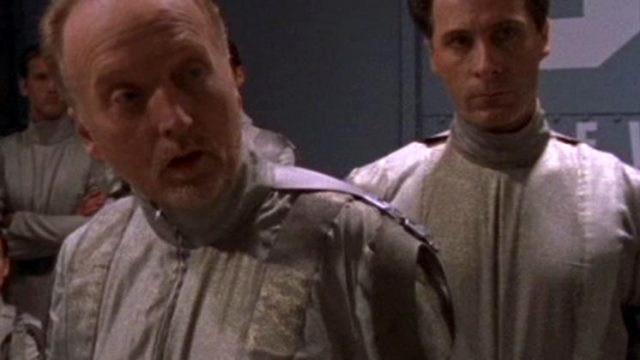 The SG-1 team rescues a group of advanced humans from a planet near destruction, and must find a new home for the refugees before the Pentagon gets their hands on them.

Rewatch “Enigma” this week! Then post your comments below, or head over to the “Enigma” discussion thread and see what people were saying back in the day. What are your favorite moments?

This one’s definitely a classic. I have to argue the whole “the Tollan are the first technologically advanced humanoid race encountered by Stargate Command” bit, though. I always figured that the Nox had their mystical abilities through incredibly advanced technology somehow. I could be wrong, but that’s just how I always assumed.

On a side note, my vote still goes to Outcast (Atlantis S4E15) for the next Episode of the Week. It’s one of my favorite episodes of the franchise and I feel like it’s often overlooked.

Also even if the mystical abilities weren’t advanced technology, flying cities like the one you see at the end of the episode seem pretty high on the technological advancement list.

Two sad things about watching this episode is sad and wrong after the series has ended, the Tollan’s fate in season 5 and that we never see the nox again after a cameo.

I liked the episode. I think the Tollan group’s leader’s attitude was out of line in the beginning. He was just down right rude.

In general, I would’ve been nice to see the Tollan’s play a much bigger role instead of being wiped out.

Hey Steve, they actually played a much bigger role BY being wiped out. It was a demonstration to show just how powerful Anubis was: Able to destroy one of the most advanced civilizations in multiple galaxies. It was certainly sad to see them go, though. :(