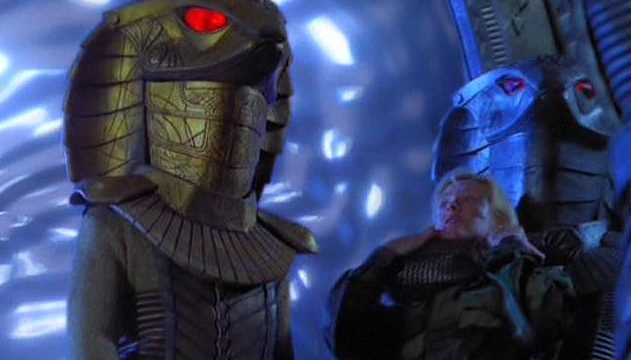 When powerful aliens come through Earth’s Stargate, Colonel Jack O’Neill returns to Abydos to retrieve Daniel Jackson, who has discovered that the alien transit system includes much more than the two planets.

All throughout 2015 we’re rewatching all of the Stargate franchise’s epic season premieres, mid-season 2-parters, and finales! These tend to be the big, effects-heavy episodes, with major plot developments … and, of course, they tend to be fan favorites. Buckle up!

“Children of the Gods” Facts:

“Children of the Gods” on GateWorld:

Download Children of the Gods: Final Cut now from Amazon

What about Kawalsky? He was another feature film character recast for the series.

To this day I’m actually still gutted they killed Kawalsky off and that Ferretti just disappeared.

I loved that they recut and remastered this episode. Not only is it a much better episode now, but I don’t have to warn all my friends (and their sensitive parents) about there being extensive nudity.

My only complaint was that they recut the ending so as to not foreshadow The Enemy Within. Other than that, pretty much everything was done better.

I still kind of remember watching this for the first time all those years ago. Its so sad to see what TV has become. Children of the Gods was a damn good example of good Sci-Fi TV.