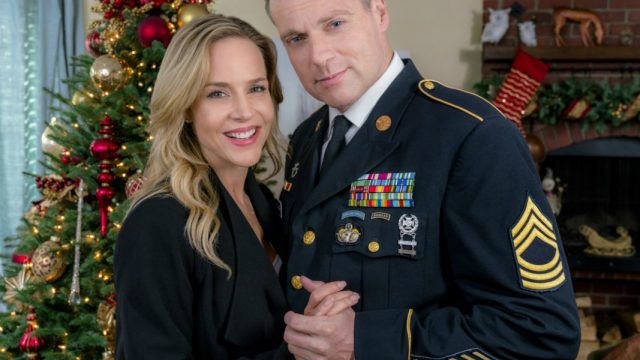 Stargate SG-1 actor Michael Shanks is back on Hallmark this holiday season with a brand new movie. Shanks (“Daniel Jackson”) co-stars in Christmas Homecoming with Julie Benz, whose credits include Dexter and Syfy Channel’s Defiance.

The movie is part of Hallmark’s annual “Most Wonderful Miracles of Christmas” celebration, which starts October 27 and continues through January 1.

Shanks plays Jim Mullins, a U.S. Army Captain who faces a new deployment after falling in love. From Hallmark:

A military widow rents an apartment to an Army Captain recovering from an injury in battle. As they team up to save the town’s military museum with a Christmas fundraising event, these two “wounded birds” find themselves falling in love — and being healed by the magic of Christmas. 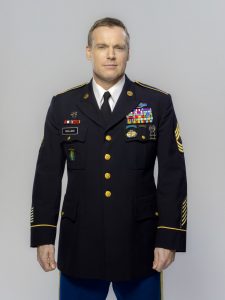 Other familiar faces from the Stargate family appearing include Jay Brazeau (“Harlan” on SG-1, “Lord Protector” on Atlantis), Daryl Shuttleworth (who played alien commanders in “New Ground” and “Cure”), and Daniel Bacon (Dr. Watson in “Sunday”).

Christmas Homecoming filmed in and around Vancouver, British Columbia in August, with the working title Welcome Home Warrior.

Read more about Christmas Homecoming, check out the full photo gallery, and watch the trailer now at Hallmark.

Poor Shanks. A job is a job, but these Hallmark movies always seem like the lousiest roles.

The other way to look into this is that he makes these silly movies worth watching — basically because, as we all know, he’s a wonderful actor!

Quick correction: according to these pictures, Shanks’s character’s rank is master sergeant, not captain.

Thank you for not letting me be the only one with discomfort over the discrepancy!