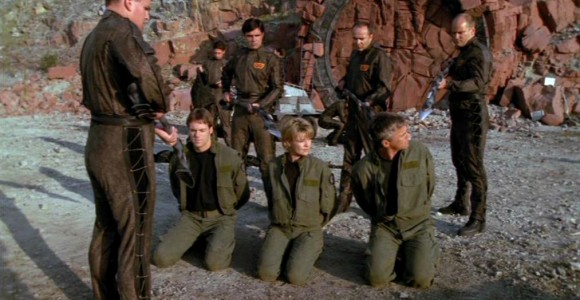 Jack, Sam and Daniel are imprisoned on a planet and become pawns in a war of ideology, while Teal'c must rely on the kindness of a local man after being badly injured.

The S.G.C. gates to a world populated by technologically advanced humans (P2X-416), where the Stargate has only recently been unburied. General Hammond sends through a M.A.L.P. probe,and the team finds a young man and woman standing near the gate, alarmed but curious.

SG-1 visits the world, and learns that the young man – Nyan – is a scientist on the continent of Bedrosia. Bedrosia is at war with a rival continent, the Optricans, over their beliefs regarding the origin of human life on their world. The Optricans believe that aliens brought humans there thousands of years ago through a portal, while the Bedrosians steadfastly believe that their god – Nefertum – created life on Bedrosia.

Nyan is convinced that SG-1 and the Stargate are proof that his own beliefs – and the beliefs of all Bedrosia – are wrong, and that the Optricans have been right all along. But others in Bedrosia believe differently: the military arrives soon and captures O'Neill, Carter, and Jackson, believing them to be Optricans sent to present a grand hoax that supports their views.

Teal'c and Nyan escape the military force, led by an imposing and stubborn man named Rigar. Teal'c soon comes face-to-face with a Bedrosian soldier, and the two exchange fire. Teal'c is hit in the face with an energy weapon, and blinded; the other is killed.

Nyan soon finds Teal'c, and brings him to safety in a nearby cave. He wants to help heal Teal'c, and soon shows up with a medical device capable of regenerating the optic nerve. Teal'c is committed to mounting some sort of rescue operation to free the rest of SG-1, but is genuinely afraid when faced with his own helplessness.

Meanwhile, Rigar has erected an energy field around his encampment, and is holding O'Neill, Carter, and Jackson in small, electrified metal cages. He refuses to believe their story, and plans to soon kill them.

After SG-1 fails to check-in, General Hammond redials the planet and tries to communicate with them. Rigar tells him that he is holding the three, and threatens to kill them if any rescue mission is undertaken.

Rigar's men soon find the soldier killed by Teal'c, and the leader demands that Daniel tell him what happened. He believes there is a fourth from their team still at large – but SG-1 continues to deny Teal'c's presence on the planet. Rigar shoots Sam, and then Jack, with a zat gun, but Daniel refuses to cooperate.

With further treatments from the device, Teal'c's eyesight gradually improves. He convinces Nyan to help him free the team, and together they overpower two Bedrosian soldiers and hijack their transport vessel. They use the ship to penetrate the energy barrier, and a firefight ensues.

While Teal'c dodges shots from the Bedrosian energy weapons, Nyan makes his way to the holding cages and frees the rest of SG-1. They fight their way back out, stunning more guards and rendering them unconscious. Daniel makes it to the newly unburied D.H.D., and dials the Stargate to Earth. The five people – SG-1 and Nyan – flee from the remaining soldiers and dash through the Stargate, leaving Bedrosia behind for good.

Nyan is granted refugee status by the United States, and agrees to become Daniel's new research assistant. Though not exactly groundbreaking science, it will allow him to do what he has always wanted: learn more about where his people came from.