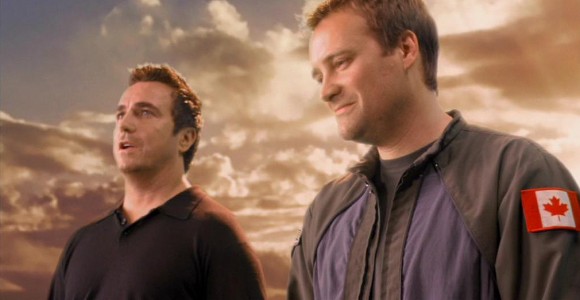 The team tries to relax during a mandatory day off, until an explosion leaves three people dead – and reveals that one scientist is a walking time bomb.

It's a typical Sunday in the city of Atlantis, as Dr. Elizabeth Weir and her people go about their everyday business. A handsome young scientist, Mike Branton, finds Elizabeth at work in her office on her day off.

Mike is obviously smitten with the expedition's leader, and is fighting an uphill battle when he tries to convince her to go to lunch with him. Elizabeth has a personal rule against dating people under her, but Mike persuades her that there's nothing wrong with eating lunch at the same table.

During their "not a date" the charming man begins to wear down her shields, and even kisses her. She seems attracted to him, but decides she can't allow a potential romance to bloom. She's saved from the awkward situation when the control tower radios her: There has been an explosion in the city. Three people are dead and more are injured, and they believe it may have been a bomb.