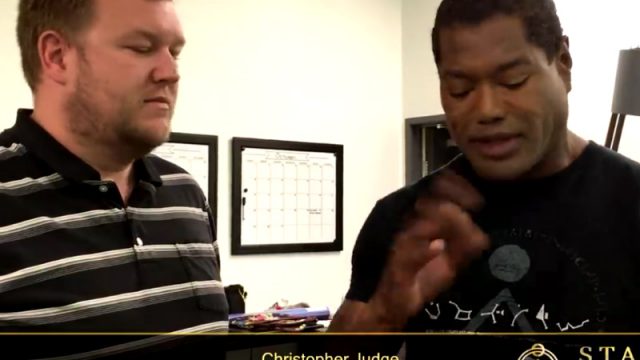 For weeks we’ve seen pictures of Stargate actors, writers, and producers sitting down for Stargate-related interviews — but the details about just what is going on in the studio have been kept under wraps. Now, we have an answer!

MGM has announced “Dialing Home”, a new interview series, debuting the news with a short video teaser on the Stargate Official Fanpage (below). The minute-long preview shows footage of actors recounting their time on Stargate and reliving some of their fondest memories of the franchise.

The interview series will be co-hosted by actor Christopher Judge (“Teal’c”) and GateWorld’s own co-editor, David Read. Read will also produce.

“Dialing Home” is part of a new wave of Stargate content that is being created for the digital subscription platform Stargate Command, which launched in September.  The interview series will stream there alongside Stargate Origins — the fourth live-action Stargate series — at the end this year of the beginning of 2018.

A full trailer for “Dialing Home” will be unveiled in the near future.

In addition to being a complete repository for Stargate TV series and movies, Stargate Command hosts behind-the-scenes featurettes, editorial content, quizzes, and a fan forum. The all-access pass is $20 (USD) for a six month membership, which unlocks premium content like Stargate Origins. A free section — which includes the forum and all editorial content — is available to anyone with a basic account.