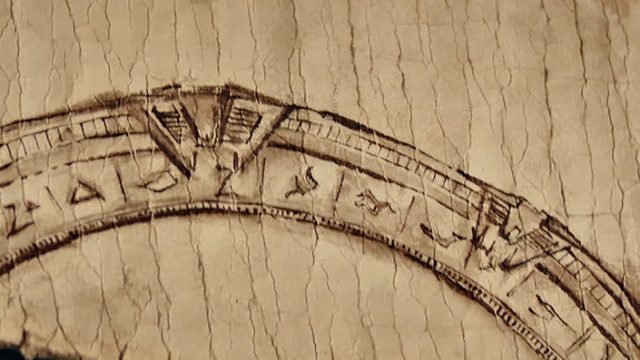 The full-length trailer for Stargate Origins has finally arrived, as we count down the final two weeks before the premiere of the franchise’s first digital streaming series.

Stargate Origins follows young Catherine Langford (Ellie Gall) as she and her father (played by Connor Trinneer) try to understand the Stargate and to protect it from the Nazis prior to the outbreak of World War II. The 10-part series will stream exclusively at Stargate Command.

Clocking in at just under two minutes, the trailer reveals a conflict with the German officer Wilhelm Brücke (Aylam Orian) that leads Catherine and her friends (Philip Alexander’s Captain Beal, and later Shvan Aladdin’s Wasif) to try and rescue him. It also reveals that the Stargate will, indeed, be activated — and could take someone to a world we’ve never seen before. Take a look below.

GateWorld’s full coverage of Origins continues this month as we prepare to launch our complete episode guide with plot analysis, screen caps, and more! We’ll also have discussion threads for every episode over at GateWorld Forum.

In 1939, Professor Paul Langford and his daughter Catherine are still grappling with the mysteries of the ancient relic they discovered in the Egyptian desert more than ten years ago. With war looming in Europe and funding running out, these brilliant minds are approaching their lowest ebb. Little do they know, answers are about to present themselves in a dangerous form, when the Nazi Occultist Dr. Wilhelm Brücke approaches their facility with a sinister motive.

Enlisting the help of two young soldiers, Catherine must use all of her wit and nous as she and her new allies embark on an adventure into the unknown to rescue her father, and save the Earth from an unimaginable darkness.

Is this confirmed to be in the same continuity as SG-1, Atlantis and SGU? Because I’m already sensing continuity headaches coming based on that trailer if the gate does indeed open. The only time it should have opened in 1939 was when Baal came through it while it was being transported across the Atlantic on the Achilles and alt-timeline Cam blew his head off. Certainly, Catherine never saw it open before Daniel figured it out, whether it honours series canon or just the original movie. Looked like someone was wearing a Goa’uld hand device at the end too. Also, how… Read more »

I have been a huge stargate fan since it all started and I am so excited to finally see some more stargate after all these years. I think its important to know going into Origins that its never going to be as good as SG1 and Atlantis. They have promised it will be canon to the rest of the franchise, and I know thats obviously important to a lot of fans. But Origins is going to be its own thing. We all need to be grateful that we are getting stargate back, we are lucky to get this at all… Read more »

I only hope that the acting isn’t as hammy as it seems in the trailer. Also, it looks like Conor Trineer is “offed” quite quickly in the story. Too bad about that. Like the rest of you, I hope for the best with this “incarnation” of SG.

Does the whole movie take place in 1939 or just start in 1939? The make mention in the trailer that she has been studying the device for 10 years. So if the movies takes place 1939-1949 she loses Ernest Littlefield through the gate in 1945

1939 is also the year when the Achilles shipped the gate to the US from Egypt, as it was depicted in Continuum.

I think this would be a nice way to connect up the continuity between the film (1928) and Continuum. Perhaps this incident with Brücke is the main impetus for the decision to get the gate out of Egypt and onto American soil. (Hence the large shipping crate we’ve seen in the BTS video matches the one on the Achilles.)

Am I the only one that noticed that the gate is wrong? The top Chevron is the one from the original movie gate. It’s not the same as in the TV shows.

I hope it’s entertaining. It’s just that fans have waited so many years for more Stargate and this seems to have an after school special look to it. I also hope it won’t try to rewrite continuity. Keeping fingers crosses, but not getting hopes up too much.

It just occurred to me that somehow (esp. if continuity is with CONTINUUM), that maybe someone will come across Cameron Mitchell at some point? (I know, 1929).

If there will be an alien bad guy, he does not have to be coming to Earth. It’s totally possible that there are dormant goa’ulds on Earth besides the ones we came across in SG-1 (Isis, Osiris and Sekhmet).

According to what we know, the Stewart expedition found two canopic jars in 1931. Maybe Brücke found another one, the snake took a host, and wants to leave Earth, hence the gate activation.