Beware of SPOILERS for Stargate Origins below, and in the interview!

GateWorld’s 2-part interview with Stargate Origins writer Mark Ilvedson continues! Mark offers lots of insights about the production process, certain story choices, and what was changed during the process. (Be sure to start with Part 1 if you haven’t heard it yet.)

In this half of our conversation Mark talks about taking on Catherine as a female protagonist, using the ancient Egyptian language, and working with co-writer Justin Michael Terry. He also reveals lots of secrets about developing new characters such as Wasif, Brücke, and Aset,and making sure that the producers’ choices segued into the story that is set decades later.

Ilvedson said that the last scene of Origins went through several revisions as the writers worked to find a fitting end point for the characters. That included a major change for British officer Captain James Beal, Catherine’s love interest (played by Philip Alexander). 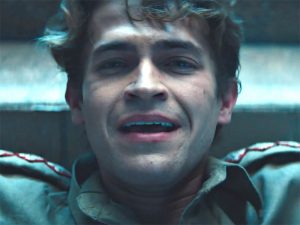 “In the original script Beal didn’t die,” Ilvedson revealed. “It was a very Humphrey Bogart ending. … In the original script he pushes them through [back to Earth], they all get through and he doesn’t get shot. When he pushes them through the gate he follows. And on the other side he looks at Catherine, and she looks up and has no idea who he is. Then he makes the decision to not tell her what happened.”

In the final version that was filmed Beal is tripped up by Serqet at the threshold of the Stargate. His final thoughts are of Catherine as the Goa’uld executes him with her staff weapon.

“The last scene is [Beal] is talking to an agent, and he’s lying about what happened. He’s making the decision to protect the gate and get the gate to America. And he’s sacrificing his relationship with Catherine to keep her and keep the gate safe.”

The second part of GateWorld’s exclusive interview with Mark Ilvedson is 33 minutes long, available via the player above. You can also find it on our YouTube channel, or subscribe now to the GateWorld Interviews podcast wherever you get your favorite podcasts!