MGM is rolling out a bonus for Stargate Command’s All-Access pass holders: more time to enjoy the site’s premium content. The paid service will be extended from May through midnight on September 19, 2018.

This includes all of the digital platform’s existing content — every episode of Stargate SG-1, Stargate Atlantis, Stargate Universe, the 10-part original Web series Stargate Origins, plus the 1994 feature film and 2008’s Stargate: The Ark of Truth and Stargate: Continuum. It also includes the interview series “Dialing Home” and more behind-the-scenes exclusives.

Fans won’t be asked to re-up with any additional costs during this period.

Subscribers were told when the site opened in September that some of the “premium” content would be going away after May 15, 2018 — making the one-time cost of $20 U.S. a pretty screaming deal for those who signed up right away, but less so as the months wore on.

And the list of compatible devices has grown since September, with Google Chromecast and several Internet-ready TVs now ready to stream Stargate content. In March the site announced a partnership with the VRV subscription service, allowing a way to get Stargate Command through Apple TV, XBOX One, PlayStation 4, newer Roku devices, and others. Most recently Amazon Fire devices have been added to the compatibility list. 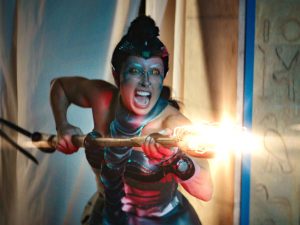 Stargate Command will continue to publish new installments of “Dialing Home” all summer long, as well as more feature articles and behind-the-scenes material.

The announcement corrects an automated e-mail some All-Access subscribers received yesterday asking them to renew their subscriptions. The studio tells GateWorld that the message was sent in error.

Further details about the upcoming “Feature Cut” of Stargate Origins, as well as the digital download of the script for the Web series that was included in the All-Access pass, will be announced within the next few days.

Sometime between now and September we expect to hear official word on what’s next for the Stargate franchise, including whether or not Origins will continue with a second story.

Meanwhile keep your browser locked on GateWorld for the very latest on Stargate Command and the franchise’s future! Follow GateWorld on Twitter for more breaking news alerts.

I’m surprised it’s taking so long to release the feature cut. Given what was originally said about how Origins was written & produced, I’m still holding out for that before I watch it. And I can’t be the only one.

…and yet I just received an email that my membership ran out… they have to get their act together. And…I have to watch the rest of the ORIGINS episode. It wasn’t terribly compelling, but I still hope it will lead to more!