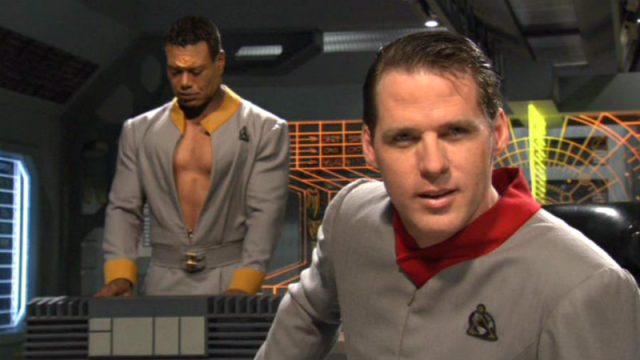 What could be more fun than our favorite sci-fi worlds colliding? We’ve seen plenty of Star Trek cast members put in high-profile guest spots on Stargate SG-1 or Stargate Atlantis. But did you know that several familiar faces from the Stargate universe have also gone the other direction and appeared on Trek?

There are too many actors to list who have both franchises on their résumé. To keep things fun and surprising we’re disqualifying the very obvious off the top: Robert Picardo was a Voyager series regular before he ever came to Stargate as Richard Woolsey. John de Lancie is better known for Q than for Frank Simmons, and most people remember Connor Trinneer from Enterprise — before he was the Wraith Michael (or Dr. Langford on Stargate Origins).

So rather than looking at Star Trek leads who did guest spots on Stargate (and there are a bunch of them — but that’s for another list!), here we’re looking at familiar faces better known for Stargate who once turned up on Trek.

This first one might shock you to your … roots. Here we go! 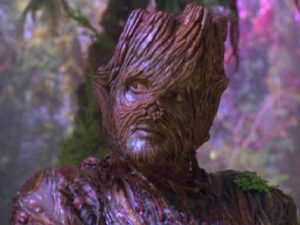 Actor: Louis Ferreira
Appeared In: Star Trek: Voyager, “Once Upon a Time” (1998)

To help keep young Naomi Wildman’s mind off the real dangers her mother is facing on duty, Neelix takes her to the Voyager holodeck for a little play time. It’s the interactive holodeck fairy tale, The Adventures of Flotter. And among the magical fantasy creatures they meet there: Treevis, an animated tree and friend of Flotter.

Beneath all that prosthetic work is none other than actor Louis Ferreira (who worked under the name Justin Louis)! More than a decade later he would be cast on Stargate Universe as Colonel Everett Young, a down-and-out Air Force officer who some days would rather be anywhere other than stuck on the Destiny. Maybe when he sleeps the Colonel dreams of birds singing in his branches? 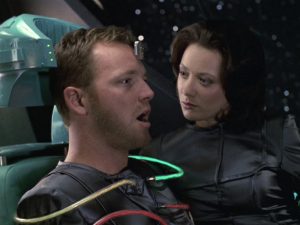 After picking up a rusty old shuttle at a space junk yard Tom Paris spends all his off-duty hours trying to fix up the ship and get her flying again. He slowly becomes obsessed with the project, and when he activates a piloting neural interface we find out just how obsessed the ship is with him, too. “Alice” begins speaking to Tom and giving him directions … eventually causing him to flee Voyager for her own agenda.

Alice was played by Claire Rankin, whom Stargate fans will know better as the psychiatrist Dr. Kate Heightmeyer. Making her first appearance counseling Teyla in “The Gift,” Dr. Heightmeyer recurred in five episodes of the show. She ultimate met a grisly fate, at the hands of her own nightmare, in the fourth season episode “Doppelganger.” 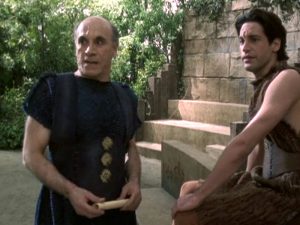 Another Voyager crossover is for prolific character actor Tony Amendola, beloved by Stargate fans as the Jaffa Master Bra’tac. He was introduced as Teal’c’s mentor and father figure all the way back in SG-1‘s first season (“Birthright”), and appeared in an astounding 26 episodes of the show.

Tony had a small role in one episode of Star Trek: Voyager‘s sixth season. B’Elanna Torres crashes her shuttle on a planet with a primitive humanoid culture, where she meets a young playwright trying to satisfy the local governor. Kelis leads a troop of actors who put on original stage productions, akin to ancient Greece. Tony plays “Chorus Member #3,” a member of the troop of actors. Actor: Ronny Cox
Appeared In: Star Trek: The Next Generation, “Chain of Command” (1992)

The sixth season two-parter “Chain of Command” is TNG at its dramatic best, in part because of the contributions of Ronny Cox. His character, Captain Edward Jellico, surprises the whole crew when he comes on board the Enterprise to take command of the ship. Jean Luc Picard is relieved (off on his own secret mission that will get him captured by the Cardassians), and Jellico sets about making the ship his own. Rearrange the duty shifts. No more plunging necklines for Troi. And get those fish out of the Ready Room.

On Stargate, Ronny’s character of Senator Kinsey could have been an entirely forgettable, two-dimensional adversary. He turned up in a clips show at the end of the first season (“Politics”), demanding that the Stargate program be shut down. But the veteran actor is just so good, and when he returned in 10 more appearances Kinsey became a major force to be reckoned with — one who eventually came within a heartbeat of the U.S. presidency.

“There are four lights!” But there’s only one Ronny Cox. 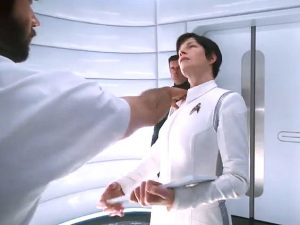 She had a much bigger role on Syfy’s 12 Monkeys, but actress Alisen Down has played a recurring character in the Stargate universe: Dr. Brightman, a surgeon who temporarily served at Stargate Command. She appeared in the Season Eight episode “Lockdown”, and then turned up again by communication stone to help out on Destiny in several episodes of SGU (starting with “Divided”). (She also played an Alteran woman in flashbacks on The Ark of Truth.)

Down’s Trek appearance happened just recently, on Discovery. When Spock shares his memory of his escape from a Starfleet medical facility, Down plays the lead psychiatrist who comes to his room.

Can you think of other Stargate actors who have put in appearances on a Star Trek TV show or film? Drop them in the comments below!

Paul McGillion, aka Dr Carson Beckett from Atlantis, had a small role in Star Trek 2009 as the guy who hands out ship assignments. I remember reading rumors online that he was originally up for a much bigger role, that Paul was going to play Scotty, before JJ Abrams decided to cast his buddy Simon Pegg instead. How awesome would Paul McGillion have been as Scotty? He would have been great.

I wonder if there’s enough to do a Transformers list. The ninth season episode Camelot alone has three different actors from various Transformers cartoons. Garry Chalk (Chekov) was Optimus Primal on Beast Wars, Trevor Devall (Kvasir and Hermiod) was Scourge in Cybertron and Alpha Q in Energon, and John Noble was Unicron in Prime.

You forgot Armin Shimmerman who was a Nox. He was fantastic

You left out the 2 most important. Colm Meaney who plays Miles O’Brien in Star Trek and Cowen in Atlantis. Robert Picardo who plays The Doctor in Voyager and Richard Woolsey in Atlantis

How did you forget John Delancy? 😂😂😂

Sabrina: He’s mentioned in the intro! (It also explains why we went with these five, and not a bunch of Trek-famous actors.)

Go back to sg1 and leave the original sg1 cast and crew in place for another 10 seasons!!

And what about Connor Trinneer!

Connor Trinneer! Micheal on SGA and Charles Tucker on Enterprise.

Rick Worthy. He played K’tano/Imhotep on SG1 (The Warrior”), Noah Lessing on Vogager (“Equinox”), and a Xindi Arboreal on Enterprise. I think he was also on DS9. He’s on LOTS of sci fi shows.

John Billingsley, Dr. Phlox, was in an episode of SG1.

“The Other Guys” episode!

I see a lot of people do like me and rush to the comments without actually reading the whole article :)

Jolene not dressed as well being a Jaafa!

How about Dr Flox from enterprise, John Billingsley I think, he did a couple episodes of sg1

GUYS! READ THE ARTICLE BEFORE COMMENTING. Not just the entries, the actual criteria for the list. Come on. No one forgot anyone, you’re missing what the list is actually about.

“To keep things fun and surprising we’re disqualifying the very obvious off the top”.

Eric has it right here! I appreciate the enthusiastic comments … but “Star Trek actors who have appeared on Stargate” is a different list. This one is for actors better known for Stargate.

The actor who played Rak’nor also played a Klingon in the DS9 episode The Way of the Warrior.

Eric Steinberg: Known to all of us as Netan on SG-1, but also was an engineer on Star Trek: First Contact!