Browse: Home / 2019 / May / The Other Jack O’Neill: Bill Nikolai Talks About Life On Stargate 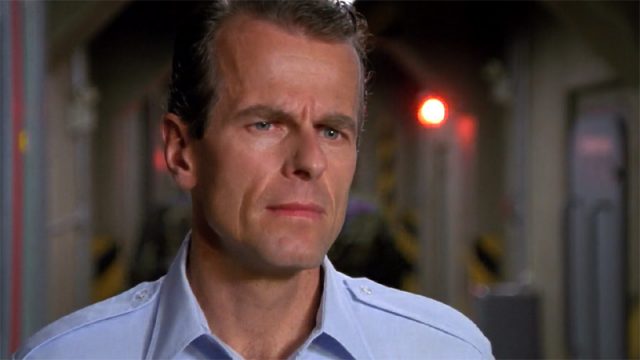 Stargate SG-1: "Window of Opportunity"
GateWorld is excited to welcome Taylor, “The Stargate Guy,” as our newest contributor! Check out his YouTube channel for more original videos. – Ed.

Bill Nikolai was the other Jack O’Neill. Bill served as Richard Dean Anderson’s stand-in for several years on Stargate SG-1, as well as back when Richard was starring on MacGyver. Bill was quietly in the background of Stargate SG-1 from Seasons Three through Seven — as well as Stargate Atlantis whenever Rick made an appearance.

But you’ve seen him more than you think. He played the bewildered Tech Sgt. Vern Alberts. Perhaps most famously, Colonel O’Neill rides a bike though the S.G.C. and right past Vern on everyone’s favorite episode, “Window of Opportunity.” 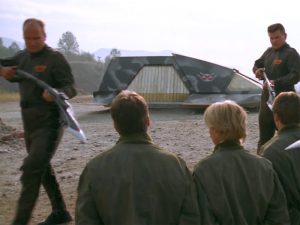 When Jack O’Neill is shot from behind, it’s often RDA’s stand-in Bill Nikolai. From “New Ground”

So what does a stand-in do? If you see a close up shot of Jack O’Neill’s hands, or an over-the-shoulder shot with Jack’s shoulder and the back of his head when Teal’c or Sam is talking, odds are that you were looking at Bill Nikolai rather than Richard Dean Anderson.

I knew a lot about the film industry and how a set works. Over the years I’ve seen interviews from the main cast, several supporting roles, and prominent behind-the-scenes people. But I wanted to talk to someone with a unique perspective on the show, and Bill Nikolai has that perspective. Most of the time, a stand-in is sitting on the set watching everything that is going on around them — from how the actors move and talk, to whether the producers like the latest guest star.

I had the wonderful opportunity to sit down with this secret star of Stargate and interview Bill for the first time in Stargate history. Bill was on the set of SG-1 for years and has several stories to tell, as well as some wonderful insights into how the set worked. He also talks about how someone could work on any set as a stand in, photo double, or background character.

Taylor is from Oregon and has been a fan of Stargate since watching on the couch with his dad. He has a weekly YouTube channel called The Stargate Guy where he talks about anything and everything Stargate.