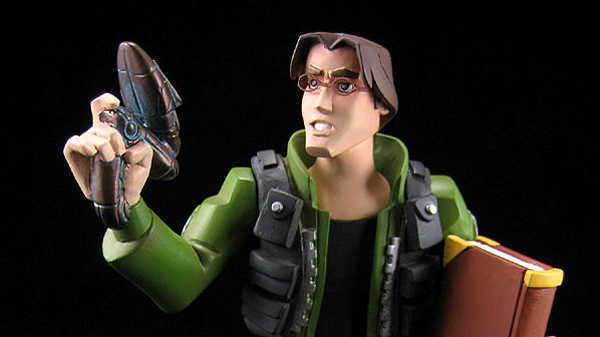 Quantum Mechanix delighted fans in 2009 with a collector’s item that, to this day, remains unique in Stargate fandom. The Teal’c “animated maquette” statue is cast in resin and hand-painted, standing over six and a half inches tall (the staff weapon is over nine inches, or 23 cm) — a cartoon-like rendering of one of the heroes of SG-1.

As much as we love Teal’c, of course, the series was never meant to be a one-and-done project: additional team members were in the works as well, along with plans for (unspecified) villains from the show. And the hope inside the company was to eventually create Atlantis character figures.

But QMx cancelled the line, and additional statues never saw the light of day. 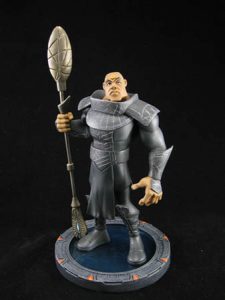 Teal’c was the first and only statue released in QMx’s SG-1 maquette line.

At least two additional maquettes were commissioned and in various stages of pre-production, however. Nottingham-based artist Caitin Ashford sculpted statues in this series for Daniel Jackson and Samantha Carter (based on commissioned art by Kristele Pelland, which you can check out below). She has since posted images of her work.

Caitlin has been working in the toy and figurine industry for nearly 20 years. We caught up with her for a conversation about her work:

GateWorld: Were you a Stargate fan before you began this work? If not, how did you get to know the show and the characters?

Yes, I was a fan before I started the project. But it was a an even better excuse to buy the series on DVD and watch over and over! I typically had the DVDs on in the background while I was sculpting these.

There is a lot of personality in these sculpts. How did you approach Daniel and Sam, and each of their respective characteristics?

I had a pretty good feel for the characters before I started any of the sculpts. So combined with the control art, I kinda knew the feel of where they wanted the characters to be. 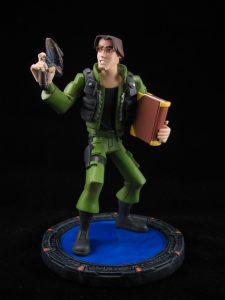 The Daniel Jackson maquette reached the prototype phase, and even appeared on display at an industry convention.

I didn’t sculpt Teal’c, but was given Daniel to sculpt first of all when I approached QMx about sculpting work. He was sculpted by hand and made it as far as the sample stage (the prototype was made into a first production sample). I do know he would have featured an interchangeable arm to swap between a pistol or a zat.

They were trying to avoid a direct actor likeness, instead going for the “feel” of the character instead. Daniel had a kind of meerkat alertness about him, while the instruction for Sam was to try and keep a pixie-like quality to her face. Although I tried to go for a strong, soldier-type feel for her too.

Did you find anything about these sculpts particularly challenging?

The sculpts were traditional hand sculpting using a combination of wax and chavant. The trickiest aspect was getting the three-dimensional look to reflect the 2D artwork, and then getting a look right with the mix of curves and angles to go with the style.

The Sam sculpt only made it to the prototype stage. We went through about six different stages on the head — again avoiding a direct likeness, and going for the feel of the character. 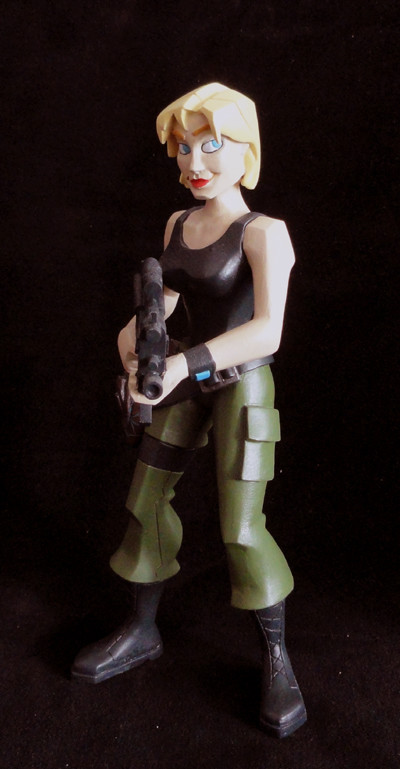 The Sam Carter maquette was sculpted, but never entered production.

Did you hear any specifics from QMx when the maquettes did not move forward into production?

I don’t really know what happened with the line, whether it was poor sales or just not performing as strongly as they’d hoped. I know the Teal’c statue remained on their site for quite some time — but it is no longer there, so it may have been that the licence lapsed and they were unable to continue.

I never saw any artwork for an O’Neill figure, but I think they were planning on seeing how popular the others would be.

I know the Daniel was shown off at a toy show, but after that they decided not to go ahead with the release. I don’t think Teal’c performed as well as they’d hoped — otherwise we’d have had the full range by now.

Our thanks to Caitlin for sharing about her part in this unrealized bit of Stargate history!

In the end, the Teal’c maquette from QMx ended up a unique collector’s item — the only character released from a cancelled line. The production run was limited to 1,000 units. 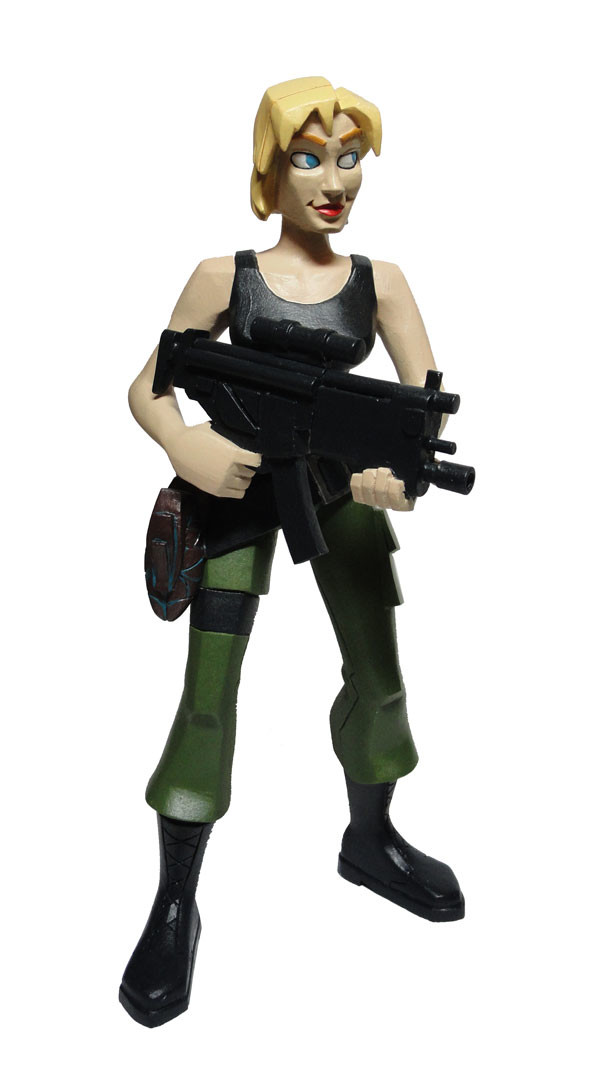 Caitlin worked to capture the “feel” of the character — including a sly smile for Sam — but not to produce the actors’ license.

The company also released another half-dozen items under license from MGM in 2009 and 2010, including top-tier F-302 and death glider models; a hanging Stargate mirror; and an F-302 blueprints poster. And the stand beneath Teal’c’s feet went on to become a set of Stargate drink coasters, using the same resin cast.

A Puddle Jumper model was also rumored to be in development, but that too did not come to fruition.

Meanwhile, Caitlin says that she is planning to go ahead and sculpt an entire line of SG-1 figurines in her own style. She has even commissioned reference art for a Jack O’Neill.

Find more of Caitlin’s work at CaitlinAshford.com and CaitlinSculpts.com! She’s also on Twitch and Instagram. 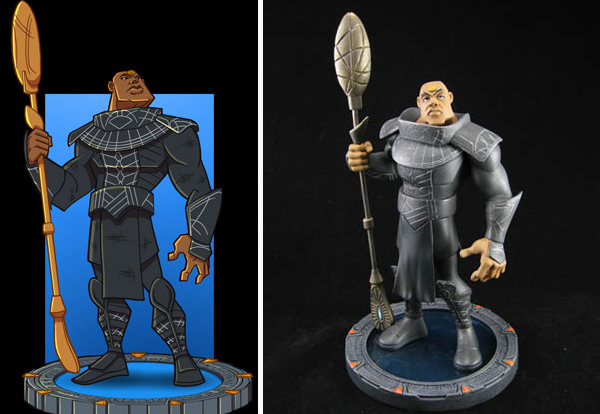 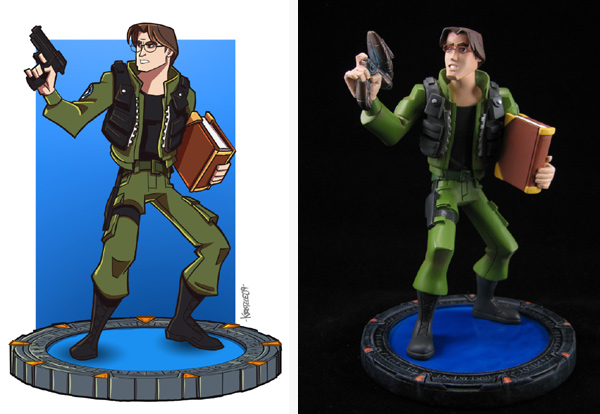 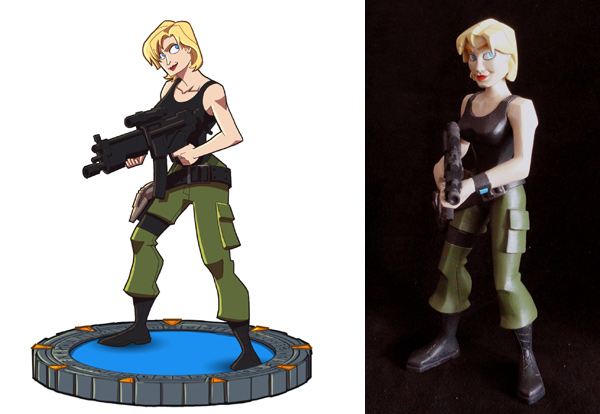 This makes me wish there was a Stargate animated series. (I mean, other than ‘Infinity’ obviously)

I was thinking the same thing.