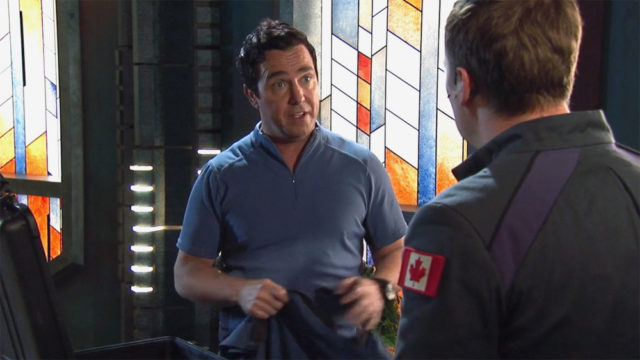 Eleven years after the show went off the air, it’s a real treat to get to see unaired footage from Stargate Atlantis.

The series aired for five seasons on Syfy Channel in the U.S., airing its swan song in January of 2009. Now in a post on his blog writer and executive producer Joseph Mallozzi has posted a deleted scene from the show’s fifth season – and it’s like seeing old friends again.

The scene features Paul McGillion as Carson Beckett and David Hewlett as Rodney McKay. It’s an extended cut of a scene that appears early in the 2008 episode “Whispers,” as Carson packs to head out on his own to serve the people of the Pegasus Galaxy as a sort of intergalactic “Doctors Without Borders” (a real-life humanitarian organization).

Following Carson’s miraculous resurrection (and his being thawed from stasis) the two discuss Carson’s choice about what to do with his life now … and who is going to continue to care for his wee baby turtles. The scene clocks in at 1 minute and 40 seconds:

In the final cut of the episode, their conversation is cut short right after Dr. Beckett expresses his sense of guilt over helping the Hoffans to perfect their anti-Wraith drug. Colonel Sheppard arrives to recruit Carson for an off-world mission following the discovery of one of the Wraith hybrid Michael’s laboratories.

Be sure to visit Joseph Mallozzi’s Blog to read the full post, which also includes a Q&A with fans. Mallozzi talks about the unproduced script for Stargate: Revolution, the fate of the Asgard, the creation of Stargate Universe – and whether creator Brad Wright ever told him the cosmic secret the show was meant to answer at the end of a 5-year mission.