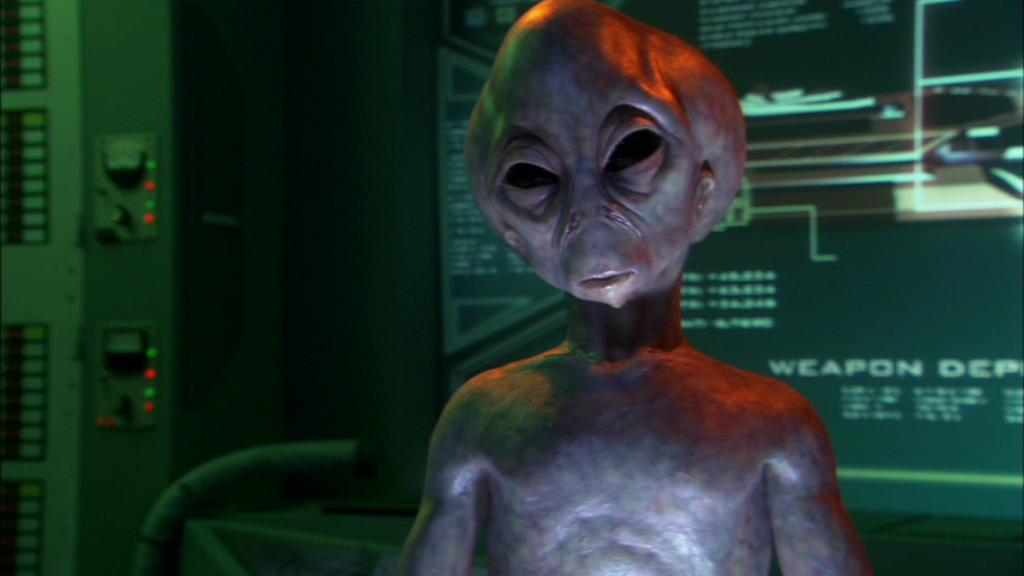 One of Earth's most powerful allies, the ancient and benevolent Asgard were aware of the Tau'ri for some time. They assumed the personae of Norse gods on many worlds, including Cimmeria (protected by Thor's Hammer), and K'Tau, a more progressive world but still heavily immersed in Norse beliefs.

The Asgard were once members of an ancient alliance with the Nox, the Furlings and the Ancients. The species was governed by the Asgard High Council, which monitored activity on protected worlds and formed decisions on actions taken against aggressors.

Physiologically, the Asgard averaged about one meter in height, with grayish skin tones, small, skinny limbs, large heads and black eyes -- bearing a striking resemblance to the Roswell Greys described in countless UFO abduction stories. The Asgard were incapable of meiosis (sexual reproduction) for thousands of years. They resorted to a solely enhanced mitosis (cloning) existence, forcing them down a path that eventually led to their extinction. Before that time, some Asgard took drastic steps to ensure the survival of the species, including kidnapping people from Earth to study human development.

Despite the Asgard's small physical stature, their size was no comparison to their intellect. They successfully developed a multitude of advanced technologies that dwarf those of the Goa'uld, including faster-than-light travel that can launch an Asgard vessel from one galaxy to another in minutes.

The Asgard established a Protected Planets Treaty with the Goa'uld System Lords, keeping planets such as Cimmeria, K'Tau, and eventually Earth safe from direct attack. But the Goa'uld Anubis's advanced technologies (taken or adapted from the Ancients) rivaled that of the Asgard, allowing him to eventually ignore the treaty altogether and render it unofficially void.

A chance encounter with Colonel Jack O'Neill of Earth forced the Asgard to reexamine humans and their role in the galaxy. They had studied human beings closely, determining that the species has great potential. However, O'Neill proved to them that humans were, in fact, ready to become a part of a bigger galactic picture, and the Asgard then designated him their representative from the human race.

All of the Asgard's technologies and intellectual capabilities forced them to a deadlock in a battle with an artificial species in their galaxy: the Replicators. The Asgard, having exhausted all possible alternatives, greatly depended on the Tau'ri to render aid to the species in attempting to defeat this enemy. It was ultimately the efforts of humans that put an end to the chapter of the Replicators permanently when the machines entered the Milky Way to wage war with the Goa'uld.

Through the potential of Jack O'Neill, the Asgard acknowledged that they considered humanity to be the fifth race. When their genetic degradation led to a point where their last attempt to halt it brought about a debilitating disease, they chose to put this to the test.

A splinter group of Asgard survive in the Pegasus Galaxy. From "The Lost Tribe"

Before retreating to their home planet Orilla, the Asgard endowed the Earth vessel Odyssey with a library computer containing the sum of their knowledge and technology. To prevent the rest of their technology from falling into the wrong hands, they detonated Orilla's core, completely eradicating the Asgard footprint from the universe -- or so it was believed.

More than a year later a splinter group of Asgard, who had broken off to solve their genetic degradation problem using less ethical means, were discovered in the Pegasus Galaxy. They were not surprised when they learned of the death of their brothers in the Othalla Galaxy, which seemed to only strengthen their resolve to fix their cloning problem by any means necessary.

The fate of this splinter group remains unknown.

Thor's Hammer - SG-1 discovers Cimmeria, an Asgard-protected planet, and encounter a holographic recording of Thor -- though they do not meet the Asgard themselves.
Thor's Chariot - When SG-1 returns to Cimmeria, Jackson and Carter communicate with the real Thor, who rescues the planet from the Goa'uld Heru'ur.
The Fifth Race - The library of the Ancients is downloaded into O'Neill's mind, causing him to dial a world outside our galaxy -- where he meets the Asgard face-to-face.
Fair Game - Thor and the Asgard mediate negotiations between Earth and the Goa'uld System Lords, allowing Earth to be included in the Protected Planets Treaty.
Point of View - SG-1 helps the SGC in an alternate universe contact the Asgard, who rescue Earth from Apophis's invasion.
Nemesis - The powerful enemy of the Asgard is revealed when Replicators infest Thor's ship, taking it to Earth in an attempt to spread there. SG-1 must destroy the ship to stop the invasion.
Small Victories - Major Carter joins Thor in defending an Asgard world from a Replicator invasion, finally giving them hope that their long war may not end in defeat.
Red Sky - SG-1 finds another protected planet, K'Tau, and must plead for the Asgard's help when they cause a natural cataclysm. The Asgard refuse, as it would be a violation of the treaty.
Fail Safe - The team uses the K'Tau hall of wisdom to ask the Asgard for help when they find a meteor on a collision course with Earth -- but without success.
Revelations - The Asgard enlist SG-1's help to rescue a scientist from a world under siege by the Goa'uld -- who have defeated Thor in battle and captured him.
Prometheus - SG-1 is stranded in deep space aboard the X-303 when Thor arrives to ask for their help in saving the Asgard homeworld from the Replicators.
Unnatural Selection - The Asgard enlist SG-1's help to capture the now highly-evolved Replicators in a trap, giving them thousands of years to figure out what to do with them.
Disclosure - Thor arrives on Earth to defend the U.S. military's operation of the Stargate program, and to outfit the Prometheus with Asgard shields and weapons as a thanks for SG-1's efforts.
Lost City, Part 1 - When O'Neill downloads the Ancients' knowledge into his brain again, the S.G.C. once again tries to contact the Asgard, but without success.
New Order, Part 1 - Teal'c and Carter travel to the Asgard galaxy Othalla, where the Asgard have created a black hole to try and destroy the Replicators -- without success.
New Order, Part 2 - Thor saves O'Neill from the Ancients' knowledge in his mind, and the team helps defend the last Asgard world from a Replicator invasion, giving them a powerful weapon against their technological foes.
Covenant - When a wealthy industrialist creatures an Asgard clone and shows it to the world, Thor arrives to help SG-1 convince the world it was a fake.
Unending - The Asgard commit mass suicide, calling all members of their species to their new homeworld and passing their entire technological and cultural history on to Earth (via the Odyssey's new Asgard computer core) before exploding their planet.
First Contact - The rogue Asgard travel to Atlantis to steal a piece of technology which will help them win their battle against the Wraith, and thus secure dominance in the Pegasus Galaxy.
The Lost Tribe - The rogue Asgard reveal themselves to Daniel Jackson, and later fail in destroying the Wraith with the Attero device.