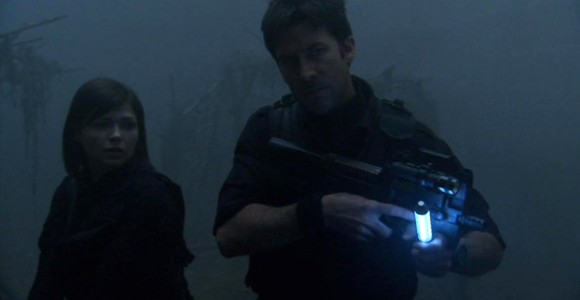 Dr. Carson Beckett, back in Atlantis, is packing his bags. He is heading out into the Pegasus Galaxy to treat victims of the Hoffan plague ("The Kindred, Part 1"). Rodney McKay is trying to talk his friend into staying when Lt. Colonel John Sheppard summons Beckett for a mission.

The two men rappel down a mountainside and a take a long hike to meet Teldy's team. Surprised that the team is all-female, both men find a reserve of energy as they continue on to the catacombs and lab. Wraith consoles and stasis pods confirm that this is one of the Wraith hybrid Michael's secret labs, one which Beckett (who was held by Michael for nearly two years) didn't know about. Porter has already disabled Michael's lethal security protocols ("Search and Rescue").

At Captain Vega's suggestion she, Sheppard and Teldy go to investigate the nearby village. Mehra stays behind to babysit the scientists as they study research logs. Beckett quickly determines that the unfortunate beings in the pods are Michael's early attempts to create human-iratus hybrids ("Vengeance"). These creatures, however, are combinations of humans and several other species. This means Beckett will be unable to reverse the experiments and restore these people – apparently the inhabitants of a local village (now abandoned) – to their families.

The village has been abandoned, but Sheppard senses someone watching them. They set a trap and corner Mirellus. He tells them how villagers began disappearing a year and a half ago, prompting those remaining to move to the next village where Mirellus himself now lives. He believes this village is cursed and he wanted to warn them. With nightfall at hand, he leaves to return to his own village.

Beckett asks Sheppard if they can stay overnight in the village, as there is too much data to cull in one short session. Sergeant Mehra escorts the two scientists there. She is again on babysitting duty when Sheppard, Teldy and Vega decide to visit Mirellus's village.

In the lab, a pod opens, freeing the trapped former villager.

As night moves in fog swirls through the forest, affecting the team's light sources. In the village, Mehra finds a horribly deformed doll which she drops as fog emerges from a nearby well. Sheppard realizes Mirellus is following them. Suddenly, Vega is grabbed from behind and killed. Sheppard opens fire and grabs Mirellus as he and Teldy race back to the village.

Alarmed by the gunshots and now unable to communicate by radio, Mehra orders Beckett and Porter (who have begun to hit it off) to remain barricaded inside while she investigates. Sheppard's party makes it back to the lab where Mirellus confesses to opening the twelve pods. His wife was one of those snatched and he hoped to find her. Deciding they need Porter and Beckett's expertise, they all go back to the village.

Concerned by the radio silence and gunfire, Beckett leaves Porter behind in the house while he heads out into the fog to investigate. He encounters one of the blind, vicious creatures face-to-face, but escapes it by remaining silent and still. He notices that the fog comes from gills on the creature's neck. Suddenly, his comm sounds. The creature attacks him. Mehra rushes to the rescue, and together they return to the house. But Porter is now missing. They are about to search for her when Sheppard, Teldy and Mirellus burst in.

Briefing them on his discoveries, Beckett thinks that even Michael couldn't have intended to create these things. Beckett and Mirellus settle in while the three military personnel try to locate Porter. Sheppard quickly finds her hidden, but scared. As she, Sheppard and Mehra retrace their steps, they are attacked. Another creature breaks into the house and carries off Mirellus. Beckett flees, and is gone by the time Teldy and then the others reach the house.

Teldy believes the well is connected to the underground caves. The group decides to use an ultrasonic burst from the computer, lowered into the well to protect its electronics from the effects of the fog, to lure the creatures into the town square where they can be killed. Armed with P-90s, the women take up positions around the square while Sheppard plants the computer in the well. He is arming a C4 charge when he is attacked by a creature. Beckett intervenes and the two hide in the catacombs beneath the well when the computer noise and gunfire fill the foggy night.

They count the creatures they have killed, determining that they have gotten all 12. Now safe, the others return to the caves via the well. Porter doesn't want to go back into the lab itself, so she and Mehra wait in a tunnel. While Beckett downloads the remainder of Michael's data, Sheppard and Teldy find a metal door at the back of the lab and open it. Inside, they find a corridor lined with more open pods. Fog fills the corridors as the next wave of creatures attack, but a barrage of gunfire eliminates the threat.

Back in Atlantis, after two weeks of studying Michael's data, Carson is packing again. He has handed the research over to Dr. Lynch. Now he is ready to proceed out into the Pegasus Galaxy to help Michael's many victims. And once more, McKay is protesting. Sheppard comes by to wish Beckett well and ask after Dr. Porter. Beckett suggests Porter, now on R&R, would be a valuable asset on his mission. He asks Sheppard to put in a good word with Mr. Woolsey. McKay asks who Porter is and why he hasn't heard about her, and he's left wondering when Beckett and Sheppard leave for the gate room.