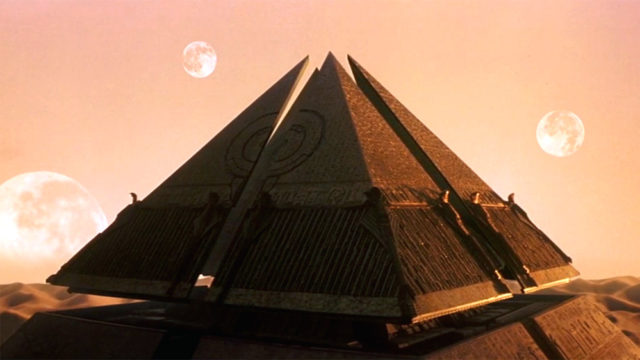 Twenty-six years ago this month Stargate arrived in movie theaters, whisking away viewers to a distant planet — and what would become a brand new science fiction universe.

Co-writers Dean Devlin and Roland Emmerich shot Stargate without any studio involvement, and if it was successful they planned to make it a feature film trilogy. They went into the 1994 movie with plans already in mind for those next two movies. Does the Stargate go to other planets? Who else has visited Earth in the distant past? And what role would Daniel Jackson and Jack O’Neil play in an alien threat to Earth itself? 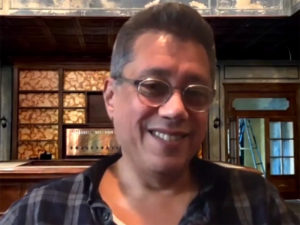 Dean Devlin on “Dial the Gate”

The film trilogy was not to be, with MGM buying the franchise and sending it to television instead. In a new interview with “Dial the Gate,” Devlin revealed never-before-known details about what he and Emmerich had planned for two sequels. (And no, 1996’s Independence Day wasn’t a rewrite of a Stargate sequel.)

Devlin said that the original plans were to use the Stargate’s eighth and ninth chevrons to go to other worlds. And just as the planet Abydos evinced a connection to ancient Egypt, these other worlds would be connected to different ancient cultures on Earth.

“The original plan of the movie was to do three movies, and so to there was going to be three major addresses,” Devlin told “Dial the Gate” host David Read. “And that’s why we needed the nine [chevrons].” Parts 2 and 3 would have also used 7-chevron addresses, but with a different chevron lighting on the Stargate to travel to a different planet.

“We had big plans for it, but we never got to explore it,” he said. “… There are two different places on Earth that are famous for pyramids. And one was an Egyptian, and our second was going to be a Mayan culture.” 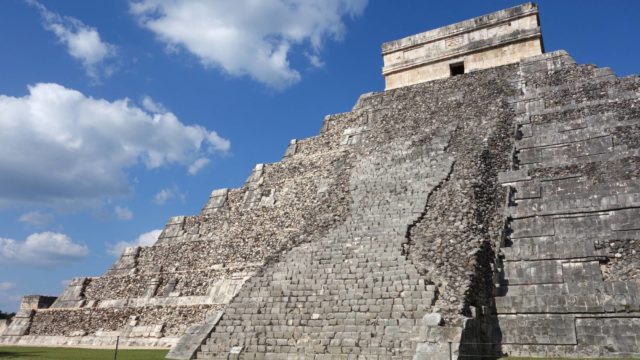 The rest of Devlin and Emmerich’s story was never told on the big screen, though five follow-up novels were published by Penguin Putnam. Written by Bill McCay, they pick up the story where the feature film left off — and they tell a very different tale than the television series that would come later, including other worlds and other alien foes.

Devlin said that he is a huge fan of McCay’s novels. “We worked with him on those original ones, and I’m real proud of those and I support those entirely,” he said in the full interview. He said that he does consider the books to be a canonical extension of the film universe, stories that could have been folded into the film trilogy — “100 percent.”

The 1994 feature film was a big hit, earning nearly $200 million worldwide and setting a record for an October theatrical release. But those next two movies weren’t in the cards. The rights to Stargate (and the keys to future stories) went to MGM because the film’s financiers got cold feet, Devlin said.

“The film was made entirely independently,” Devlin said, and “MGM agreed to release the film when no one else would release it. Because no one believed in the movie. And the week before the movie opened the people who had financed the movie, which was a group out of France, they were so sure that they had a bomb they sold the movie to MGM for $5 million. So then, MGM owned the movie.”

Fans who know the history of the Stargate franchise know that in subsequent years Devlin and Emmerich approached MGM about making two sequels in a planned trilogy. But they were rebuffed, opting instead to take the property to television. Brad Wright and Jonathan Glassner created Stargate SG-1 for Showtime in 1997.

“Roland and I went in to meet with them [MGM] to talk about the series, and they said, ‘Oh, we don’t really want you guys involved,'” Devlin said. “… It was a very painful thing for a long time, because you’re watching someone else raise your children. It was very hard.”

Devlin said candidly that he was hostile toward the television series for some time (citing in particular its use of full-frontal nudity in the first episode). But he said he eventually came around to recognize that its longevity and its fan base showed that the producers of Stargate’s 17 seasons on TV were doing good work.

“Many years later it was obvious to me that, even though I had not been watching the show, that they must have been doing something right,” he said — “because you don’t get to live that long. You don’t get to have that many fans. You don’t get that kind of passion unless you’ve done a really good show.”

Watch the conversation above, and subscribe to GateWorld on YouTube for more behind-the-scenes conversations! In the full clip he also talks about casting Mili Avital (who didn’t join the production until after filming had started), and how a big change to Jaye Davidson’s villain fixed the movie only after filming was over.

David Read’s full interview with Dean Devlin is on “Dial the Gate,” and will be published here on GateWorld as an audio interview soon.

thank you too that group for selling the rights of the movie, gave us 17 seasons of the best series of television compared too 2 b grade movies, the series are what made the movie better

Ariel
Reply to  d b

Devlin and Roland will always be the creators of the Stargate. Taking away the opportunity to develop their vision is an affront to the authors’ vision. To be happy that their film was taken away from them is pitiful.

Not remotely true, no.

The movie was very underrated scifi, and setup the great tv shows in that fun scifi realm (like Farscape, Firefly… But Stargate was more superior as did some cool character/world-building IMO ). I’m curious how Stargate would look like nowadays If a major tv studio like HBO/Netflix/Amazon gave it a huge budget like WestWorld. or do you keep it slightly mid-budget to keep it ‘fun’ (like how Dark Matter was). I wonder if Stargate will be a tough sell to Studios now that The Expanse has stargates to visit other worlds in their universe. But Stargate can go more the… Read more »

Something like the Expanse but more high tech but lesser than Star Trek Discovery tech wise.

Underrated? LOL. It lasted for 17 seasons–it’s one of the most successful franchises in TV history.

They were referring to the movie, not the series

Nineteen seasons, including Infinity and Origins.

Preferred the TV series to the movie, I think for the foreseeable future Stargate is a no go. Too many other series/films have used it’s premise for it to be original enough any more. I’m sure we all don’t want it going down the drain like Star Trek has!

I have the same idea or conclusion. Is it either a total reboot or continuation with mentionings but less screen time. Unless Amanda Tapping(sorry if i botched the name) becomes SGC General. A continuation is more advised. Goa’uld are pretty much done, Lucian Alliance is meh, Replicants etc are not worth mentioning, Ori are puff. Make a new enemy, something more misterious, nefarious, alien, something that comes from beyond the known galaxy something that even ascended ancients have trouble dealing with. And also don’t forget of Atlantis, the continuation is still there, they on Earth, they went back to pegasus… Read more »

0n the contrary, Picard and the second season of Discovery are terrific. Jury is still out for season 3.

I don’t want these guys to have anything to do with a possible trilogy. They tanked with their last movies, like independence day 2, midway which was mediocre at best.Dean Devlin is no better. I want someone to take this as an opportunity to reboot the franchise, start a trilogy then do tv shows and spin offs. If MGM can’t, then give it or pass it to someone who can.

I’m so glad those two movies weren’t made. The original film is the weakest aspect of Stargate, but a mile. It was the TV writers who figured out how to make a good story out of that mess. Those two sequels sound like the same ol’ weak and redundant storytelling Devlin and Emmerich have used on all of their movies. MGM absolutely did the right thing.

Oh, god, that sounds awful. Bigfoot? Yeti? Thank god those hacks were not allowed to continue the story. What we got instead was so much better.