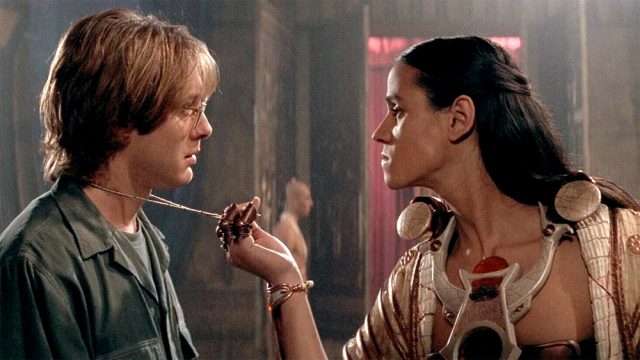 Every film experiences bumps along the road from script to screen — and 1994’s Stargate is no exception.

But while fans of the sci-fi adventure flick have long known about production challenges like the hot Arizona sun, footprints on the sand dunes, and securing worldwide distribution (that’s where MGM stepped in) there are plenty of secrets yet to be told.

This week director Roland Emmerich and producer Dean Devlin opened up with new details about Stargate and the challenges it brought — especially when it came to their lead actors. They spoke about the drama that played out on the film’s set in a new conversation with Variety, on the occasion of the film’s 25th anniversary.

Kurt Russell starred in the film as Stargate‘s square-jawed and steely eyed Air Force Colonel Jack O’Neil. Russell was a big star in the 1980s and ’90s, and we’ve known for 25 years that the Big Trouble in Little China actor commanded a $7 million paycheck. That’s a significant chunk of Stargate‘s $55 million budget, and it made headlines in industry trade publications at the time. 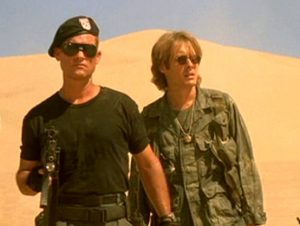 Russell actually turned down the picture several times. But it wasn’t just about pay negotiations.

“What we found out is that he had been given the wrong script,” Devlin said. “He was given a very early draft of the script that should never have gotten out. So, when he actually saw the shooting script he went, ‘Oh, this isn’t so bad.'”

James Spader played Dr. Daniel Jackson, an Egyptologist whose career is going nowhere when he is recruited to translate the Stargate’s coverstone. Spader has said publicly that he wasn’t crazy about the script, and took the job for the money.

Devlin adds an on-set anecdote that fills out this history a bit further: “There was one day where he wouldn’t come out of his trailer until we rewrote the scenes,” the producer told Variety. “Kurt Russell got very upset with him. He burst into his trailer and said ‘What are you doing?’ And Jim said, ‘Come on, admit it. The dialogue is horrible.’ Kurt Russell said, ‘Of course, it’s horrible. That’s why they pay you a million dollars. If it was brilliant, you’d do it for free.'”

As filming went on, though, the cast came to better understand the tone of the movie. And in the end both Russell and Spader were pleased with the finish product, according to Devlin.

Jaye Davidson, meanwhile, was struggling with substance abuse while the movie was shooting in 1993. “The first bad sign was when his personal assistant, who was the bass player from Frankie Goes to Hollywood, disappeared on the second day with Jaye’s phone, all his petty cash and his methadone,” Emmerich revealed. “First he was hysterical, then it got really bad. I could write a book about it.” 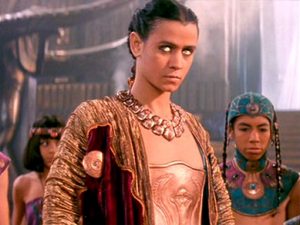 “He was having a hard time remembering his lines,” Devlin said. “We had these giant cue cards, but he couldn’t read them.”

Emmerich and Devlin also revealed that Davidson’s character, Ra, was originally meant to be a human overseer — even all the way through the filming of the movie.

“He wasn’t originally an alien in the movie,” Devlin said. “He was originally an Egyptian who worked for the aliens. He was the boss of the humans, but he was still slave to the aliens.” Only after test screenings did the producers go back and add glowing eyes, an altered voice, and a VFX shot of Ra’s true, alien appearance. “We did all of these things to make him scarier and more intimidating.”

Prior to the film’s release in the fall of 1994 Devlin told Davidson about the changes to the film and his character, and found the actor at a different place in his life. “He was so grateful that we had not cut him out of the movie,” Devlin said. “At that point, he had been sober for a little bit. He was really trying to put his life together.”

News broke in 2014 that Devlin and Emmerich had struck a deal with MGM to return to the Stargate film universe, rebooting the original concept with the first in a planned trilogy of movies.

This was three years after the television spin-offs had come to an end, with the abrupt cancellation of Stargate Universe. No new projects had been announced; MGM had recently reconstituted itself after a 2010 bankruptcy, and the future of the franchise was extremely uncertain. Devlin and Emmerich were also working on resurrecting another 1990s project with 2016’s Independence Day: Resurgence (in that case not a reboot but a straight sequel). The same writers from that film were hired to write a script for the new Stargate. 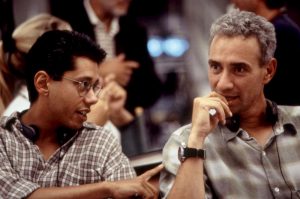 It seemed like a dream project for Devlin and Emmerich, who wanted to make a trilogy in 1994 but were denied when MGM acquired the rights and took Stargate to television instead. But by the fall of 2016 they revealed that Stargate wasn’t going to be remade after all: the project was dead.

That story has yet to be told in full for the history books, but Devlin did say that his newly rediscovered love for independent film production played a part.

“Honestly, I’m so much happier working independently,” he said. “That’s how we did the first movie. I am not really anxious to go work in a studio again. So, I think that may have also been a factor in why it fell apart.”

As for the television series that was born from their movie? Devlin suggested that he has come to terms with the fate of his story. “For many years, I was really angry about the series and wouldn’t watch it,” he confessed. “The irony is that after many years of being upset about it, I finally made my peace with it.”

Head over to Variety to read the full story.

Right, the reboot trilogy didn’t happen because Devlin didn’t want to work with the studio again, not because Independence Day Resurgence was a critical and financial failure.

Over the years it has become obvious that there is little if any true self-reflection amongst those in the entertainment industry.

Sadly ID Resurgance was awful…very disappointing. I agree that that is why. Had it been a huge success, there would already be a sequel to THAT, and the boys would have had carte blanche to do what they wanted with Stargate. It’s really too bad.

Reboots and reboots and reboots without end. It is unfortunate that the go-to strategy in the entertainment business, with respect to franchise revivals, seems to be reboots or some manner of disposing with the past. Whenever they say they want something ‘fresh and new’ it is really a euphemism for lack of original ideas and rampant ageism. If they were to make a Cinematic Stargate sequel it should absolutely include Kurt Russell and as much of the original cast as they can muster. Similarly with the SG tv shows. Let fans see a natural progression through time and pass the… Read more »

agreed sick of the reboots. it really destroys the artistic integrity of the originals.

That being said, when the trailer for Stargate the movie first came out, I thought it was a time travel movie. It took some major re-adjusting for my expectations in order to accept the movie as it was.

What Devlin fails to grasp is that Stargate’s success as a franchise is NOT due to his weak, weak movie but to the far superior TV show. Spader and Russell were absolutely correct–the dialogue in the movie was typical Devlin-Emmerich hackery.

Don’t do reboots do sequels they destroying the legacy of the films from when we were kids don’t do a film till a scripted is 100% good.