Browse: Home / 2021 / October / Now Stargate Is Leaving All Streaming Services In The U.S. 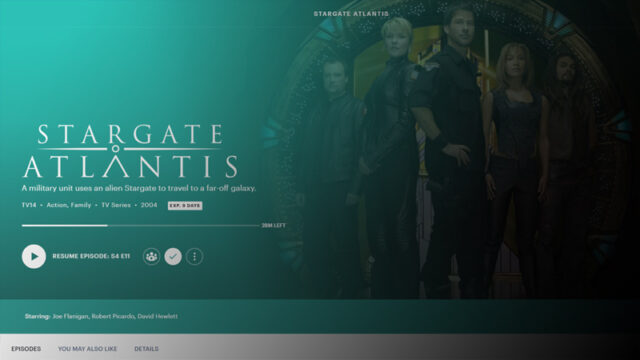 UPDATE 12/1/2021: While Stargate SG-1 and Universe have now left Hulu as scheduled, Atlantis is still available on the service and its expiration date has been removed. SG-1 has also won a late reprieve on Netflix, and remains streaming as of December 1.

After a short reprieve on Hulu last month the Stargate franchise looks to be slated to depart streaming services in the U.S. All of them.

Unless MGM’s licensing plans change, it will be a complete blackout for Stargate streaming online — the first time that none of the franchise’s 17 seasons can be streamed in the U.S. in recent memory.

Stargate SG-1, Stargate Atlantis, and Stargate Universe are once again showing as scheduled to depart Hulu in the United States at the end of October. This happened last month, but a late renewal kept the shows on the service — though only for a few additional weeks.

Hulu flags for its users whenever a show is “expiring” within the next two weeks. That’s really handy when you are close to finish up a season or a series. But it also means that, when licensing deals for Hulu’s carriage of a show is renewed at the last minute, viewers are spooked by departure notices that don’t come to pass.

The Disney majority-owned streaming service has been the last place where fans could stream all three shows from the long-running Stargate franchise, after the shows left Amazon Prime Video (most recently in February of 2021). 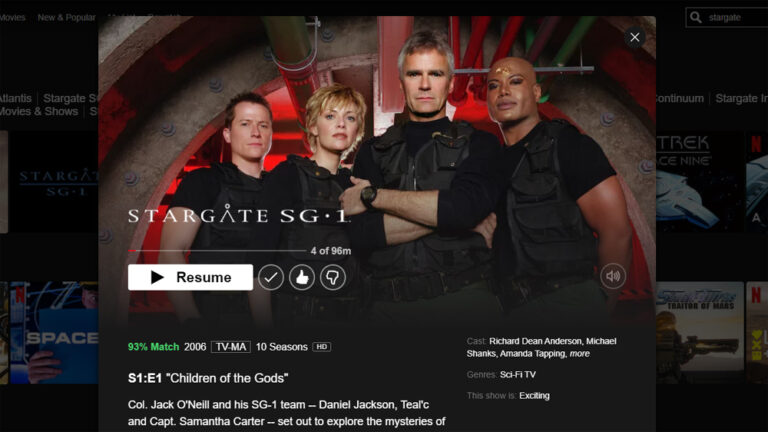 Stargate SG-1 has been on Netflix since last December.

Viewers working their way through Stargate SG-1, though, at least had Netflix to fall back on. That series has been available on Netflix in the U.S. since last December — although 213 of the show’s 214 episodes are incorrectly flagged with a TV-MA nudity rating.

Now Netflix too is losing Stargate: SG-1 is scheduled to exit the series at the end of November, marking a 1-year license period. (The Stargate feature film, though, is back on the service.)

Comet TV, a free broadcast service that is programmed by MGM, also recently ceased its twice daily airings of Stargate.

Meanwhile Amazon is in the process of purchasing MGM, the studio that owns Stargate. That deal won’t close before 2022. We are expecting that all three TV series will return to Amazon Prime Video by that point.

Until then, new short-term licenses with Netflix or Hulu are certainly possible. And for those who don’t want to remain at the mercy of studio licensing: SG-1, Atlantis, and Universe are available on Blu-ray and DVD.

Bookmark GateWorld’s Where To Watch page for updates on Stargate’s streaming availability.

GateWorld receives a commission on sales from our Amazon Affiliate links. Thank you for supporting independent fan journalism!

Perhaps this is a good omen. The beginnings of Amazon having exclusive showing rights of SG, ready for future new content.

The merger between MGM and Amazon ain’t finalized yet, and won’t be for a while longer so there are no exclusive rights to be had by Amazon at the moment. All rights are very much still MGM’s and I assume that contracts have run out and need to be renegotiated.

The MGM sale is nearing completion and according to my sources part of that deal is to let the MGM contracts run out on other streaming services as Amazon have a streaming platform and will not share content where possible. Your comment seems most likely and gives a bit of hope to us all.

Hopefully new wannabee US Gaters won’t be deterred by not being able to access full episodes for a while.I know they can watch YT clips but that’s not the same and only gives highlights.

oh man, I just started watching SG1 again on Netflix a couple days ago (currently on season 2). Gonna have to binge quick before it cuts me off mid run. D:

Try checking out your local library for the dvds do get cut off before you can finish.

Stargate is still on Netflix. They took it off leaving status weeks ago.

SG-1 is finally off Netflix and I haven’t even finished season 3.

SG-1 is actually still there, at least in the U.S. We don’t know how long the extension was for, though.

The TV MA nudity rating was correct. In 1st (, episode 1&2) there is full frontal nudity). Which would warrant such rating.

It obviously warrants the rating on the pilot episode. But MGM has every individual episode of the series rated, and the other 212 hours are all TV-PG and TV-14. Netflix ignores the per-episode data and just assigns the highest rating to the entire series.

I always thought that was stupid of them.

I just noticed that the Star Trek series (Enterprise, Voyager, DS9) will be leaving Amazon Prime on January 1st. Something’s brewing at Amazon!

And starting January 1st, Comet will be showing Farscape twice a day in the early evening.

why on earth prime report that stargate atlantis now will be removed from MGM on 28 feb?

think it has to do with Amazon buying it, notice how everything is leaving the mgm channel, i think it stems to they no longer have to charge extra because they were buying the rights to stream this because they will now own it. . . though doesn’t mean they won’t charge extra for it!

And these stupid publishers wonder why they see an increase in piracy. Stop playing the licensing games and just provide the damn content to your customers

Be nice if I could just buy individual episodes for 99 cents.