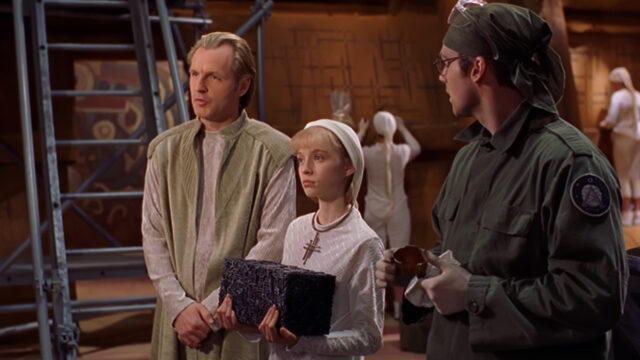 “General, for a few hours today I got to show that little girl how to be a kid. You want to punish me? Go ahead.”
– Colonel Jack O’Neill

History and literature are fraught with stories of children forced to make great sacrifices for the sake of a greater cause, and there are few things as inspiring as a child stepping up to a challenge beyond their years.

But sometimes, instead of inspiring us, the sacrifices feel like a waste. And when adults don’t give a child any choice but to sacrifice themselves, we call it abuse.

The show opens on the planet Orban, where Daniel Jackson is liaising with a man named Kalan, and working with a group of children around age ten or eleven. The children are “Urrone,” which Daniel equates to apprentices. So far, so good. Apprenticeships are a traditionally acceptable way of teaching young people a trade. Provided there is no abuse involved, there is typically no objection to the practice.

But after Kalan brings one of these Urrone children, Merrin, to Earth to help Sam learn about the Orbanians’ advanced naquadah reactor technology, we learn that this is no benign apprenticeship … 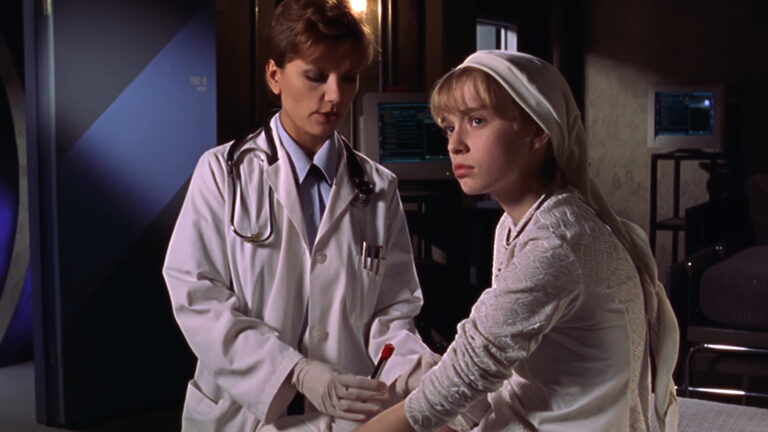 Dr. Fraiser discovers nanites in Merrin’s brain — millions of them. Nanites are microscopic devices that can cause problems, such as artificially aging people (Season One’s “Brief Candle”). Merrin, however, is unconcerned. Urrone children are implanted with nanites at birth, enabling them to learn extremely quickly.

This explains how Orban has developed so quickly in recent decades, and why Kalan asks Teal’c to tell his Urrone son Tomin (rather than an adult) all about the Goa’uld. It’s a surprising practice, and should have raised immediate red flags for the S.G.C. regarding medical ethics and the Urrone children’s lack of choice. That’s especially true of Dr. Fraiser and Daniel, who are usually so attuned to such things.

Instead, once Merrin convinces them the nanites are harmless and their immediate fears are eased, SG-1 continues with the information exchange as if everything were normal.

But when Teal’c returns to Orban, the other shoe drops. Tomin has asked to undergo the Urrone graduation ceremony — the Averium — early. Kalan asks Teal’c to continue teaching a different Urrone child, but Teal’c demands to see Tomin. He and Daniel are taken to a facility where the Urrone children who have undergone the Averium live. There, they discover the devastating truth: when Urrone children turn 12 their nanites are removed and distributed among the general population so that everyone inherits the children’s knowledge.

But the harvesting of their nanites reduces the children to an infantile state — and they are left that way.

The S.G.C.’s response is immediate. They are shocked and grieved at how the Urrone children seem to be groomed from birth, used until youth, and then evidently cast aside. For our heroes, the Urrone system is clearly child abuse. 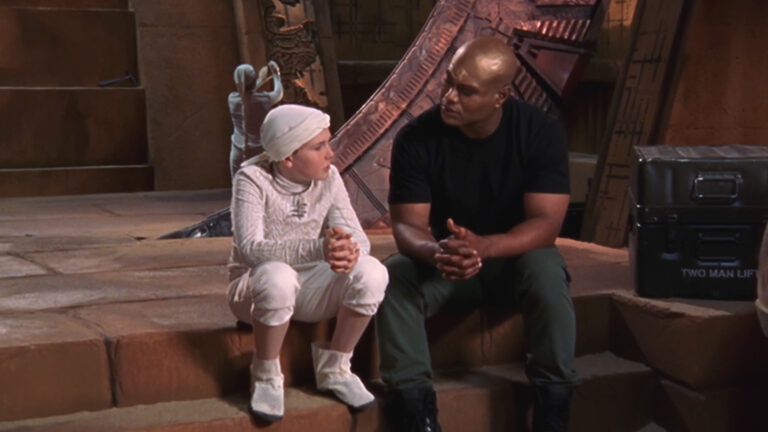 While this issue may appear black and white to the people of Earth, the Orbanians have a different outlook. Kalan insists the Urrone children are not harmed — in fact they are honored while young, and well cared for after the Averium. What Earth sees as child abuse, the people of Orban regard as necessary and honorable sacrifice. And this is where the ethical dilemma for SG-1 begins.

Kalan explains that if they do not allow Merrin to return to Orban, the planet will be set back twelve years in their naquadah reactor research. Daniel realizes that keeping Merrin will devastate the Orbanians’ development. Worse, it will do nothing to change their practices. While he does not endorse Orban’s treatment of the Urrone, he does understand how devastating forcibly dismantling even part of the Urrone system would be — especially when their new friends don’t understand why Earth is so appalled by it.

This raises fascinating questions about societal reform: When does one culture have the right — or the responsibility — to interfere in the affairs of another? And once a culture decides to interfere, what is the most effective and most ethical way to do so?

“Learning Curve” ultimately shies away from addressing these questions head-on. It was not the first episode to ask these questions (Season One’s “The Broca Divide” and “Emancipation,” among others, feature stories of confronting another culture). And it certainly would not be the last (for example, Season Five’s “Red Sky”). 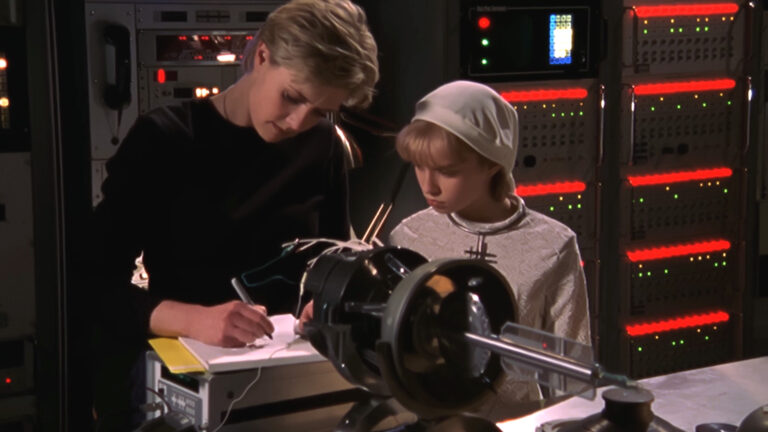 The Orbanians are more advanced than we are, and we want their technology. (The naquadah generator would in fact be a game changer for Stargate Command.) The normally simple dividing line of personal freedom gets blurred not only by cultural considerations, but also by national and planetary interests.

What does SG-1 do with Merrin under these complex circumstances? Keeping Merrin on Earth would essentially save her life, but it wouldn’t change the Urrone system. And it could, in General Hammond’s words, cause an interplanetary incident. It would be one thing if Merrin wanted to stay on Earth … but she doesn’t. She insists on returning to Orban to undergo the Averium, and cannot understand why SG-1 thinks she shouldn’t. She believes what her society has told her, and she doesn’t know any different.

Nobody at the S.G.C. is happy with this situation. But between the futility of trying to forcibly change Orban society and the damage that will do to their development, coupled with Merrin’s refusal to seek asylum and the political need to maintain the relationship with Orban, General Hammond’s hands are finally tied.

Merrin will be allowed to return home with Kalan, despite what SG-1 knows will happen to her.

Jack O’Neill, though, refuses to give up so easily. He insists the Urrone children are not only brainwashed, but abused and unloved to a horrific degree — so much so, they don’t even know it themselves. For Jack, this is a matter of principle, plain and simple. It trumps all cultural and political considerations. So when all arguments fail, he takes action. 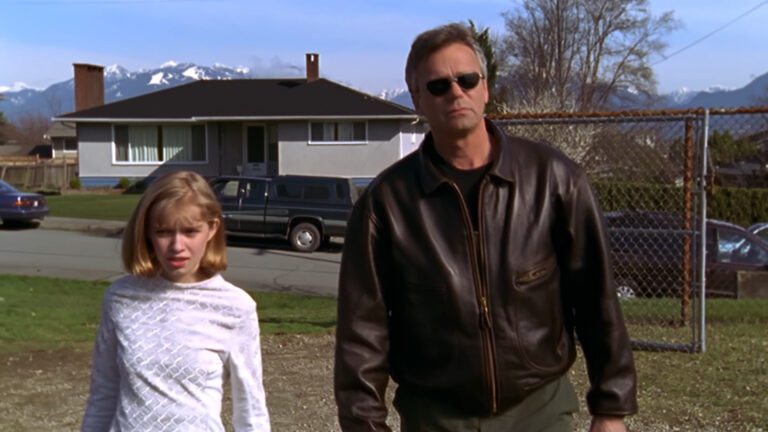 Jack does not physically force Merrin to go with him, or lie to her about having permission. But he does disobey orders to take her out of Cheyenne Mountain, an action that could be considered kidnapping. They go to a nearby elementary school, where Jack encourages her to play with the other children and paint for joy instead of precision. It’s a small taste of a normal childhood — an introduction to the idea of care-free fun.

At the end of the day, Jack reluctantly returns Merrin to the mountain as he promised her he would, and she returns to Orban of her own free will. But now Jack can let her go, albeit sadly, knowing that she finally understood a little of why they offered her asylum, and why they didn’t want to send her home to this fate. She made the same decision in the end, but at least it was a more informed decision. That heightened awareness alters her choice from a mere waste to something more noble.

Jack disobeyed orders and risked an interplanetary incident. But sometimes, a person must do a wrong thing for a right reason. Jack obviously felt this was one such occasion, and even though General Hammond says the magic words “court martial,” it’s clear that Jack is confident he ultimately did the right thing — and Hammond not actually pressing charges shows he doesn’t disagree.

Some things are worth fighting for, and trying to save a child or end an abusive system is one of those things. 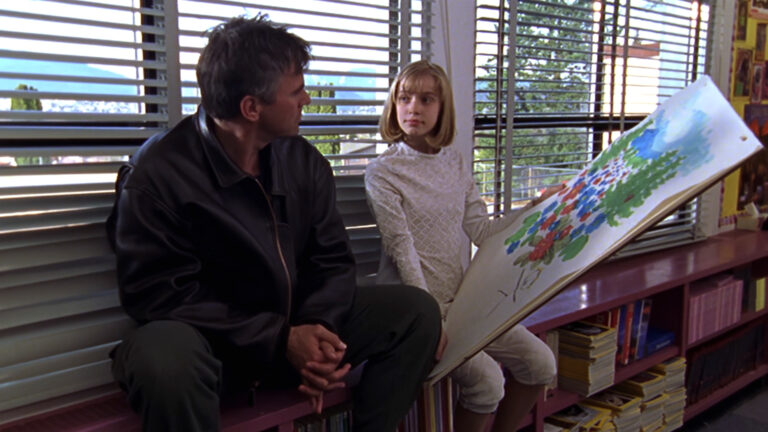 Merrin returning to Orban would have been a depressing way to end the episode, but it would have made sense. How could a few hours of real childhood overcome twelve years of brainwashing and make a major impact on the girl?

But the story doesn’t end there.

Shortly after Merrin and Kalan’s departure, SG-1 is called back to Orban. Kalan greets them at the Gate — and he’s smiling. Nobody on Orban has smiled throughout the entire episode.

Kalan excitedly leads the team to the facility where the Urrone children are housed after the Averium, and it looks nothing like it did before. Instead of unresponsive, infantile youngsters sitting listless in their bare little rooms, the corridor is flooded with children playing the games Merrin learned at school, and coloring with the crayons Jack sent with her as a parting gift.

Merrin herself, though deprived of her intellect and memory, is smiling, happily coloring the way Jack taught her. 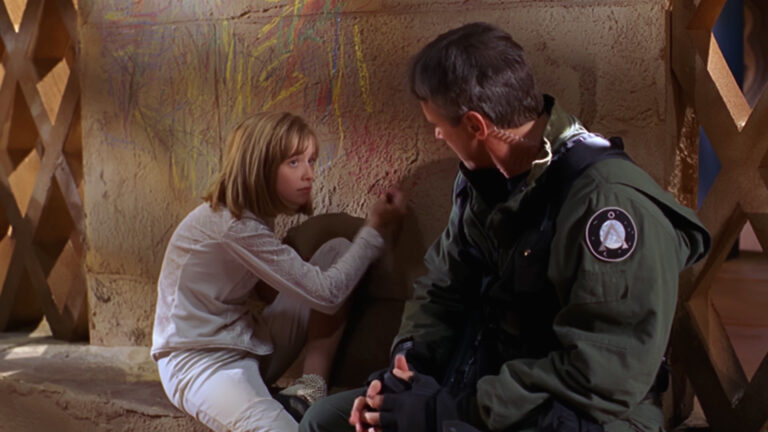 Merrin, it turns out, made an even more informed decision than we realized. She went to the Averium not only knowing what she was really sacrificing, but also that her sacrifice would teach her people about play, and school, and childhood. And she was right. Kalan explains that the Urrone children will now be taught rather than merely fed and clothed. And we know that this is not likely to be the last change to Orbanian society. There is hope now for the future of children on this planet. The sting of the Averium has been softened.

It was still a sacrifice. But Merrin, older than her years because of the responsibility she carried from birth, made a higher sacrifice than the one imposed on her by her culture. She made a knowing sacrifice. She sacrificed herself, not for her society’s agenda, but for its change, and for the other Urrone children who like her were used and cast aside. She turned a sacrifice for a cause unworthy of it, into a greater sacrifice for a much higher cause.

By sacrificing herself knowingly rather than forcibly, Merrin turned something wasteful and abusive into something more — something inspiring.

Read Next: Stargate Ethics: Crossing The Line In ‘The Other Side’

Rachel Lulich is a writer, freelance editor, and Air Force Veteran. She discovered Stargate in college and has loved science fiction ever since. Her first novel, Random Walk, is a hard sci-fi space adventure.

This was a great read! I really did enjoy the episode and what it taught in the sense of what was said in the article.