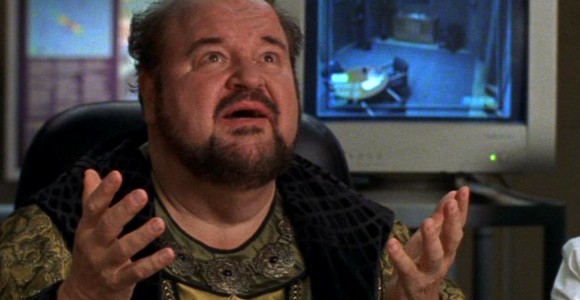 The Stargate Writer's Bible declares that each episode of the series should have some moral or lesson. The lesson of "Urgo" is that a little self-deprecating humor can be a good thing.

Season Three has been rough on SG-1. They have been kidnapped, brainwashed, tortured, nearly Goa'ulded, and generally been put through a physical and emotional ringer. They have been to hell and back, literally. Slotting this lighthearted episode directly after the powerful and intense "Pretense" creates a nice respite for the viewer, one I imagine was enjoyed by the cast and crew as well.

"Urgo" caricatures the typical SG-1 episode -- their adventures so far, their relationships with each other, Jack's wit (or lack there of, sometimes), Sam's brains, etc., going slightly over the top with everything. The opening scene, for example, is a mildly exaggerated version of the team's usual banter. This license to indulge grants us some of the funniest scenes in the history of the show.

Teal'c's coffee chug, Sam's hallway argument with the invisible Urgo, and the defibrillator discussion are hysterical! The desserts scene is classic; it is fun to see the oh-so-serious team acting in a goofy manner, even if it took alien influence to get there. Apart from its comedic purpose, the banter, ease of interaction, looks exchanged and unison speaking that is threaded through the episode show how much the team has jelled over the past three years.

The episode also produces the program's most memorable dialogue, which is especially remarkable considering that witty dialogue has always been a strength of the show. "Apparently, all desserts on base are in grave danger," and "'Death or me. Me or death.' 'We're thinking!'" vie for the prize of best line, but nothing else quite has the ring of "I wanna live, I wanna experience the universe, and I wanna eat pie." This could well be the Stargate fan's mantra.

It is also wonderful to see that the people who put together the show have a sense of humor about what they do. The production staff are not so caught up in the gravity of the moral issues they deal with or the struggle of science fiction shows to have their programs taken as serious dramas that it prevents them from taking a poke at themselves, and the cast have a sense of humor about their characters that is refreshing.

There was very little not to like in this episode, once one accepts that its not meant to be taken in the same way as the dramatic episodes. Dom DeLuise does go a little more over the top than the other actors with his portrayals of Urgo and Togar. By the end of the episode, I would not even had to think about the choice between Urgo and death; I would have begged to be put out of my misery. I can sympathize with Peter DeLuise; it must be difficult to tell your own father to stop chewing the scenery.

Additionally, some of the minor characters seemed to have difficulty ignoring Urgo. I almost felt bad for the guard in the infirmary scene, whose eyes where bouncing everywhere, trying to proclaim to the audience "I do not see Dom DeLuise! I do not see him! Aw, dang, I am never going to get a speaking part on this show, am I?"

The discovery that Urgo is not a malfunction but has become sentient is ripped straight from the Eighties comedy flick Short Circuit (but as the point of the episode is to parody rather than to break new science fiction ground, this is not important).

Finally, I think we can all be thankful that the team is not asked to sing very often. But really, these are trivial complaints when compared with everything that sparkles in "Urgo."

"Urgo" works both to showcase the comedy chops of the cast and crew, and to provide the viewer with a break from the season's dramatic developments. Bravo to the DeLuise family for this tension-breaking romp.