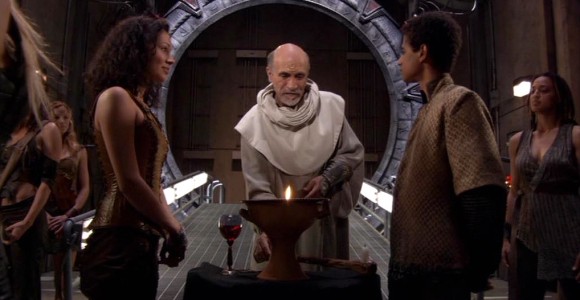 The impending wedding of his son is the least of Teal'c's worries when the Hak'tyl plan an uprising against the Goa'uld Moloc, driving a wedge between Teal'c and Ishta.

"A warrior is always stronger with another at his side."
- Ishta

The plight of the Jaffa and their struggle for freedom has been a major plotline for Stargate SG-1 since the very first season. In fact, you could say it's been there since the pilot itself, as Teal'c's motivation for saving the Tau'ri was his belief that they could be a force for good against the Goa'uld. Teal'c has gone from being the lone shol'vah, a pariah among his own people, to a rebel leader of an underground movement, to one of several such leaders of an uprising that takes a significant step forward in "Sacrifices."

In fact, part of what makes "Sacrifices" enjoyable -- and, likewise, what makes it different from the last few episodes -- is that it is a story that has developed so naturally over the years. It also helps that there is a little running, a little shooting, and a little blowing up of the bad guys.

While Moloc is the villain-de-jour, many of the tensions in "Sacrifices" come from within our group of heroes and heroines. Ishta and the other women of the Hak'tyl resistance are dedicated to their goal of wiping out Moloc, while Teal'c's priorities seem to have shifted over the years -- from being perfectly happy to knock off Goa'uld early and often, to more long-term, Tok'ra-like goals of getting rid of all of them in one fell swoop. This tension in the face of the fact that both Teal'c and Ishta have the same hunger for freedom demonstrates an important truth: often two people who want the same thing have very different and conflicting ideas about how to achieve victory.

While to kill or not to kill Moloc is the main question of the episode, it's not the only one. I was initially skeptical of the "Rya'c marriage storyline" at first, because I've seen a tendency towards "soap opera plots" this season that does concern me. A controversial marriage seemed to play right into that. But my happiness at seeing Rya'c -- and seeing him still played by Neil Denis -- won out over that skepticism. Teal'c's son represents another point of antagonism from within, and the two-front war that Teal'c is forced to fight ups the dramatic tension in a way we haven't seen on Stargate for a good month.

The conflict between Teal'c and Rya'c -- and more importantly its ultimate resolution -- will also provide a satisfactory capstone to their storyline, should this prove to be SG-1's final season.

There are a lot of little things to like about "Sacrifices." The music is distinctive without being overbearing. The costumes of the many Jaffa and the many, many Hak'tyl women are impressive, a good example of how a lot of work and a small amount of screen time can add up to a big cumulative effect. Richard Dean Anderson is in fine form -- "as usual," I am compelled to say -- as a foil for Teal'c and as the commander who's slowly but surely finding his feet in his new position.

Jack has nice moments in the episode as he finds himself the target of Teal'c's anger towards Rya'c, and then finds himself in the position of having dozens of women -- and horses -- roaming his base. Sam and Daniel are another story; he spends considerable time being Exposition Boy, and at times she seems less Samantha Carter than Amanda Tapping. Bra'tac also makes a return in this episode, looking a little older and a little strange without his customary headgear, but still every bit the teacher and leader he was when we first met him.

The episode is written by Christopher Judge, who has come a long way as a writer since he came up with the story for "The Changeling." And few fans of the male persuasion could possibly argue about the return of Ishta. I had mixed feelings about Jolene Blalock's performance; although it's a refreshing change from her day job on Enterprise, Ishta seemed a little off the entire episode, as though she were suffering from delirium tremors leading to spontaneous spurts of overacting.

But between her, Kar'yn, and Aron (played by Judge's brother) the audience gets a good feel for the people who trapped under the tyranny of Moloc -- who is, in truth, one of the more benign-looking Goa'uld. I was expecting someone a little more sinister to play the part of a foe named after a child-eating demon, but it's possible that Baal has dibs on "sinister" this season.

For the second time this year we have an emotionally-stirring, character-driven episode ... and for the second time that character is Teal'c. It's terrific, and almost enough to make me wonder if this new-found dominance has anything to do with Judge's new-found hair. "Sacrifices" prompts a multitude of questions about Teal'c's past, specifically about his feelings on being a family man and a soldier in a war at the same time. Even if this is not specifically addressed again, it should keep the Teal'c fans happy for a good, long time.

Overall, "Sacrifices" is a solid episode with few noticeable quirks, good emotion, and the welcome return of a little action/adventure to the Stargate universe.