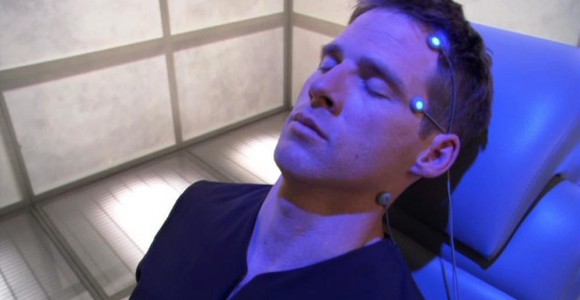 Colonel Mitchell stands falsely accused of murder – but he remembers committing it, thanks to technology that grafts memories into someone else's mind.

It's been said by many that there are no new stories to be told, only retellings, reproductions, and retreads. Knowing that, it's inevitable that a long-running series will occasionally take a story from another series and simply rewrite it in their own universe. So seeing a Star Trek: Voyager story replayed on SG-1 wasn't really all that surprising, and in my view Cameron Mitchell plays Tom Paris very well indeed -- perhaps even better than the original.

How long does it take to move past the intense feeling of déjà vu? Not too long, honestly. Instead of focusing on whether or not Mitchell actually committed the crime (we're not daft; we know he didn't), "Collateral Damage" narrows in on the efforts to find out who the real murderer is and get the memory of the crime erased from Mitchell's mind.

It all sounds so simple, and it is. The trouble is, things are simple mostly because of the liberties taken with the use of memory and brain science, combined with a lack of internal consistency within the plot. Star Trek used to solve problems by throwing around pseudo-scientific terms such as "photon torpedo" and "modulating shield frequencies," and the audience would be quite happy with that because who among us could argue that a phase variance in the warp core wouldn't cause the shields to destabilize?

But Stargate isn't Star Trek. Stargate is grounded in our reality, and it needs to work with our science. Those of us who don't have regular out-of-body experiences are unlikely to be able to run a memory back in our heads and see that memory from the perspective of an outside observer. We'll see through our own eyes, rather than watching ourselves from five feet away. As fans, though, we can ignore the little things, so we add this anomaly to the list of things we have to ignore in order to allow us to suspend disbelief. And we continue to watch.

Then we have to ignore the CSI-like rewind, pause, and zooming of memory as if it's a home video, even though we know it doesn't work like that. Then we have to ignore the problem raised by lines such as "Because we know the memory was implanted, we can expect to find anomalies," because apparently finding those anomalies without knowing the memory was implanted isn't proof enough in this universe that memories have been tampered with, so ... Add it to the list and keep on hoping things will get better.

They don't get better, though. The final nail in the coffin of the plot is when we discover that the real murderer managed to wipe his own memory, write in a new memory, and then somehow not be confused when he woke up in the memory chair with electrodes stuck to his head. Because if he was working alone, he must have come to his senses at some point sitting in that chair and wondered what he was doing there in the middle of the night.

That's when it just gets to be too much. The logic implodes and small soft things get thrown at the television. (I like my television too much to throw larger, harder things).

For those who can ignore the plot holes, there are some really interesting character insights to be found here. It turns out Mitchell's father was a huge influence on his behaviour, his outlook on life, and the determination that we've seen and heard so much about. Then there's Mitchell's experience in the Gulf, how he reacts to orders, how he likes to be sure a decision is correct before acting on it, how he faces mistakes. The character nuances are many and hopefully they will be built on in future episodes, bringing what we now know of Mitchell together with deeper involvement from the other three members of the team.

SG-1's varied perspectives, those strong moral views built on diverse backgrounds, could make for some powerful interactions of the kind that were, unfortunately, completely missing from "Collateral Damage." After all, while the audience learns a lot about Mitchell, the rest of SG-1 was left in the oft-flickering dark.

And flickering it was. For some reason, a decision was made to make this episode different in look and style. Perhaps it was an attempt to be edgier, to bring more CSI-style into a CSI kind of story. With this being a murder-mystery, I'm not convinced that was inappropriate, but it did signal a "we're doing something different this week" feel which didn't quite work for me. I like the crisp, clear lines of the usual Stargate episode, without this deliberate confusion of artsy graininess and flickering images.

It feels like there's a considerable measure of "coasting" going on here on the part of the writers. A simple walk-through of the plot and the science from a few different perspectives would have highlighted the issues, and they could have been solved before this episode went to camera. With so many new cast members and new opportunities, this season is not the time to let up on quality.