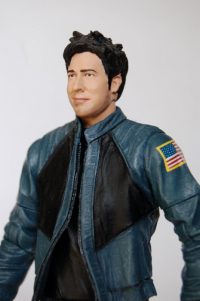 Lt. Colonel John Sheppard served the U.S. Air Force as a pilot before he was discovered to possess the rare ATA gene needed to operate Ancient technology. After joining the Atlantis expedition, Sheppard was forced to take command of the mission's military operations where his quick thinking, military training and devotion to duty have made him a crucial part of the Atlantis team. - Blister Pack Description