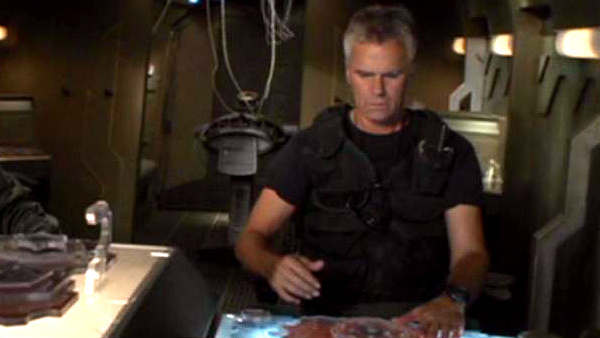 Rising, Part 1 - Much to Rodney McKay's chagrin, John Sheppard learns that he has the gene that lets him control Ancient technology.
Hide and Seek - Rodney is a test subject for Dr. Beckett's A.T.A. gene therapy, and gains the ability to use Ancient tech.
It's Good To Be King - Jack O'Neill attempts to activate a Puddle Jumper when it is discovered on Arkhad's planet.
Moebius, Part 1 - General O'Neill pilots the time-traveling Jumper back 5,000 years into Earth's past.
Moebius, Part 2 - In an altered timeline, O'Neill is told that he has the gene that will permit him to activate and pilot the Puddle Jumper.
The Tower - Sheppard presents a vial used for Ancient gene therapy to Otho, who instead uses it on himself to control the throne chair.
Irresistible - The conniving Lucius Lavin attempts to manipulate Dr. Beckett into giving him A.T.A. treatment, so that he can make use of Ancient technology for his own selfish gain.
Darkness - Nicholas Rush notes that the Ancient ship Destiny predates the Ancients' implementation of A.T.A. gene technology.