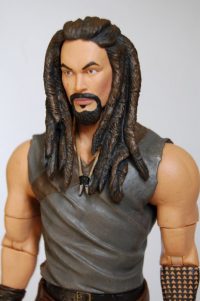 Ronon Dex bravely fought the Wraith when they invaded his homeworld of Sateda, but the skilled warrior was eventually defeated and captured. Implanted with a tracking device, Ronon became a "Runner" -- prey for recreational hunting by elite Wraith. Managing to avoid or kill his pursuers whenever possible, he was encountered by the Atlantis expedition and quickly became a valuable member of their team. - Blister Pack Description