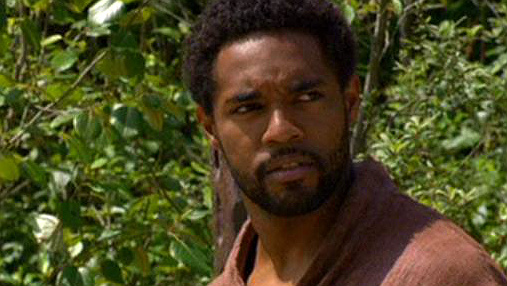 Sodan warrior from P9G-844, brother of Volnek. Jolan was in the same strike force as his brother the day he was shot in the symbiote pouch by Cameron Mitchell. When Mitchell was brought back to the village, Sodan leader Lord Haikon ordered Jolan to heal Cameron's wounds and instruct him in the Sodan fighting style through jomo se telek.

Jolan was not eager to join the throngs of the Sodan who willingly bowed before the Prior of the Ori, and felt that it was important to preserve the history of the Sodan rather than throw it all away for a new and cheap bag of tricks.

Mitchell did not realize that Jolan was actually training him to fight against himself; when kel shak lo came Jolan stepped forward to fight on his brother's honor. But he and Mitchell conspired together to have Cameron fake his own death in the middle of the fight. Jolan asked to be the one to give Mitchell a proper warrior's passing, actually allowing him to escape back through the Eye of the Gods to Earth.

But the Sodan people would fall victim to the Ori's standard-bearers. Following their cooperation with SG-1 a Prior infected Jolan's brother, Volnek, turning him into a vicious killing machine. Jolan was slaughtered with the rest of the village when Volnek turned.

Babylon - Lord Haikon instructs Jolan to train Colonel Mitchell in jomo se telek to later fight against him to the death, but Mitchell may represent an out to a larger problem the Sodan people are facing.
The Fourth Horseman, Part 2 - Jolan sits in on meetings between Colonel Mitchell and Haikon, who has now been swayed from the ways of Origin.
Arthur's Mantle - Haikon informs Teal'c that Jolan is among those killed by Volnek, who has become a bloodthirsty creature.