Library of the Four Races 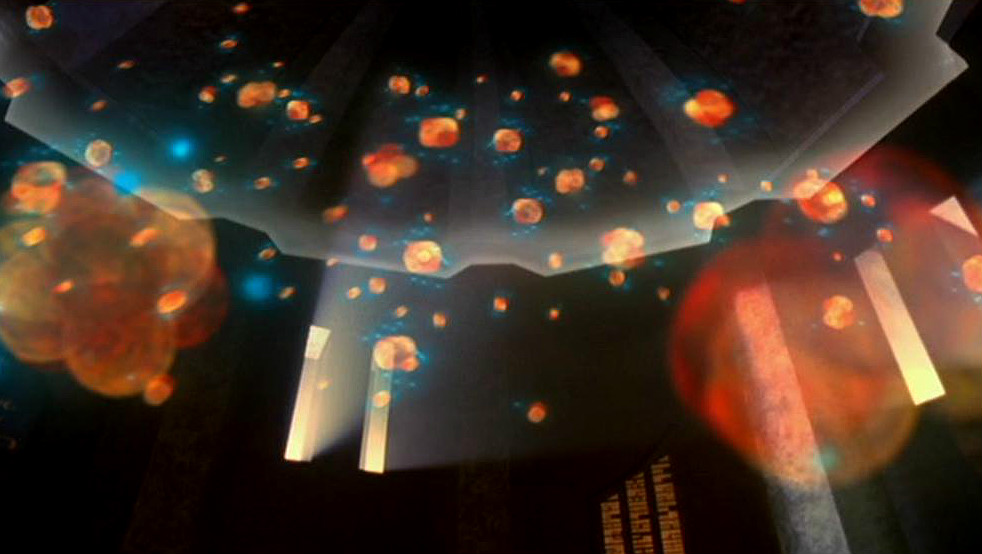 A room containing a vast amount of information in the most elemental language in existence, housed in a secure chamber of a castle-like structure dangerously near a great sea on the planet Heliopolis.

The four races comprising the Ancients, Asgard, Furlings, and Nox, chose to write down a multi-page database literally assembled in visual depictions of the 146 elements (at least) that make up our universe, including hydrogen, helium, sodium, silver, iron, barium, and xenon.

According to Dr. Ernest Littlefield's journals he believed this room was some sort of meeting place where four alien races, denoted by the symbols and distinctive writing on the walls, gathered, possibly to share knowledge or discuss relations like a United Nations of the stars.

The console in the center of the room resembles a D.H.D., and touching the ruby dome activates, as well as turns, the pages of the text. The book is displayed in the vast chasm above the reader's head.

Littlefield had fifty years to determine the means of the room, incorporating the three-dimensional nature of the information into his books using markings engraved into the floor to determine the relative position of the protons and electrons hovering above.

SG-1, Littlefield and Catherine Langford barely escaped with their lives before the Stargate itself fell into the ocean. There is no telling if the library, or anything else in the castle, survived the storm.

The Torment of Tantalus - SG-1 arrive to recover Earnest Littlefield but when Daniel discovers a library he is unwilling to leave it behind for fear that its knowledge will be lost.
The Fifth Race - Daniel makes the vital connection that another planet contains similar markings to markings found in the Library of the Four Races -- later to be discovered as a derivative of Ancient.